One must always begin at the Beginning,
For that is where one finds the End.
Betwixt the two comes the Middle,
And therein lies the story. 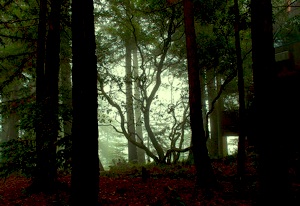 Image credit: wsmith (Flickr) with a bit of touchup by me.

“The wind may blow fierce, but it is not the cold that makes the trees shiver. Those poor, woody prisoners would burn their own branches, if only for the light.”

Jeremy Shade was a boy who treasured such tales. He collected them in fat notebooks with a fine and measured hand. He was careful to note each word as it was said, not wanting to miss the slightest detail or moment of dread.

His parents felt awful about this habit of his, wallowing in horror and fear. But try as they might, they could not convince him to give it up. He only laughed when something should have scared him, only giggled when terror should have gripped him, and rolled on the floor holding his sides when he should have been petrified.

UPDATE: This story is now available on Kindle!

6 thoughts on “A Halloween Story: Jeremy Shade and Spatula Inn”