Inspired by a love of word games and carnival fun, WordFlipper is a fast-paced word finding game that will challenge your inner lexicon and your dexterity!

A Few Words from WordFlipper Players

“Flipping is really fun. Takes a game or two to get the hang of it, but then it’s really addictive.”

“This is really different, in a good way. Love the use of the accelerometer.”

“It’s all about that last 30 seconds. Great game!” ~ Bruce Fenton aka @Jooser

“So odd to have something so physical directly connected to something so cerebral. Think, think. Type, type. SHAKE! SHAKE! :)” ~ Crystal Williams aka @BigBrightBulb

Get WordFlipper from the iTunes App Store

The most-awesome Lonnie Lazar reviews WordFlipper on Cult of Mac!

…”it really must be played to be appreciated.”

My interview with the wonderful crew from The App Show:

The App Show – Episode #29 from Coefficient Media on Vimeo.

This game has two features that I really like:

1) the use of the accelerometer in a word game is great.
2) the ability to reuse letters as many times as you can opens up longer and longer words.

That’s it. You’re ready to play!

White Screen Of Death – So far, I’ve had three reports of WordFlipper failing at launch and putting up a white screen. This is out of several thousand downloads, but I take this sort of stuff seriously. I believe the issue is with the OpenFeint social gaming add-on and the fine folks at OF are looking into it. In addition, I’ve gone ahead and updated to the latest version of OF and pushed a new binary to Apple. This will be version 1.2. Hopefully, this will resolve the issue.

Thanks to everyone who downloaded version 1.0! Your feedback was great and I’ve worked hard to add in your most requested features plus a few others.

If you’re new to WordFlipper, welcome aboard and thanks!

To Flip or Not to Flip…

When I created WordFlipper, I wanted to make a game that combined my love of word games with the fast-moving action available on the iPhone/iPod Touch. I still love playing with the Flips ON, but I heard from a lot of people who wanted the option to turn it off. So that’s just what I’ve done for version 1.1!

A shot of the new SAVE button.

I’m really pleased with the result as it makes WordFlipper two games in one. Also, with the addition of Awards, I’ve created achievements for both modes of play which extends the fun!

Leaderboards, Awards, and Flipping With Friends!

WordFlipper now has global, online leaderboards, awards, and connections to Twitter and Facebook. There are also chat rooms where you can talk with other flippin’ friends live online.

All online services are provided by OpenFeint. OpenFeint powers a number of great games and I’m proud to add WordFlipper to the list! 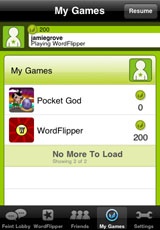 See all your OpenFeint-enabled games.

There are two ways to launch OpenFeint: Tap the Scores & Awards button on the Home screen and select Global Leaderboards when prompted or tap Game Settings and then OpenFeint. 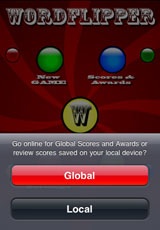 Once you’re in OpenFeint, tap the WordFlipper button at the bottom of the screen and you’ll get a list of options, including leaderboards and achievements. 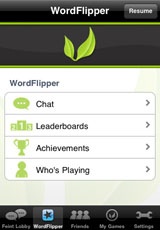 Screenshot of awards in OpenFeint.

OpenFeint also allows you to hook up with friends across games. So, not only can you see your own scores, but also those of your friends! To turn this on, tap Friends and then connect to Twitter or Facebook. 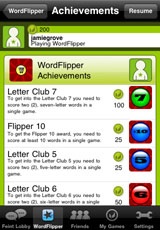 Screenshot of awards in OpenFeint.

I’ll release more awards (and categories) once every two weeks, so best of luck and keep flipping!

The GO light comes on when it’s time to start. It will be replaced by a flip arrow or the SAVE button once you’ve entered at least three letters.

With Flips ON, longer words need more “flips” to score. You also get more points for longer words, so there’s an incentive to go long.

With Flips OFF, you only press the SAVE button once.

When you get a good flip, the direction arrow lights up. If you need to flip again (i.e. you have enough letters to require more than one flip) you’ll also hear a sound like a cowbell. The next directional arrow will appear after that (unlit).

When you score a good word (by flipping or saving), the lights above the word flash green. You’ll also hear a nice ping.

When you try to enter a word that doesn’t exist, the lights below the word flash red. You’ll also hear a ping a few octaves lower.

When you try to enter a word twice, both sets of lights flash. You’ll also hear an off-key ping.

I wanted to add an incentive to make players think about strategy to increase their scores. That’s where the Word Bonus and Double-Double Zones come in.

Hey, I know this is a word game and all this math is crazy… so basically, save your longest words for the end to maximize your score. Scoring the big words at the end can mean the difference between a 70 and a 700 point game.

“Can Word Bonus and Double-Double Zones combine to form a giant mega bonus?”

You bet! If a Word Bonus Zone occurs during the last thirty seconds of the game, qualifying words get the word bonus first and then get the Double Double bonus! With a little strategy and a little luck, you can really rack up big scores.

WordFlipper has a few game settings to allow you to customize the game play.

Thanks for playing WordFlipper! This game was conceived, designed, and programmed by Jamie Grove. It comes without any warranty whatsoever.

** If you toss your iPhone out the window while driving, well, maybe you shouldn’t play WordFlipper while driving. In other words, HANG ON!

Get WordFlipper from the iTunes App Store