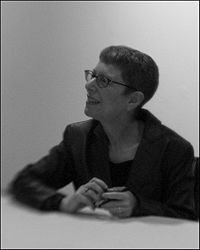 Terry Gross: No, she didn’t call me.

I had another interview with Terry Gross this morning.

No, it wasn’t for real. It was just me in the car talking to myself again. This happens more than I ought to admit, but I doubt I’m alone in the world of fantasy author interviews.

Actually, I’m pretty good at calling up Terry’s voice in my head. I bet I could even get her to read an extract from on of my stories. Let’s give it a shot:

It is not probable that this monomania in him took its instant rise at the precise time of his bodily dismemberment. Then, in darting at the monster, knife in hand, he had but given loose to a sudden, passionate, corporal animosity; and when he received the stroke that tore him, he probably but felt the agonizing bodily laceration, but nothing more.

“So tell me what did you mean by that?”

“Um… Well, Terry, I guess I really haven’t much of a clue what I meant because I didn’t even write that. You’re reading from Moby Dick.”

Ok, so maybe I don’t have total control of my personal Terry Gross just yet. Still, it’s fun sometimes to pretend that I’m actually going to end up on Fresh Air someday if I keep working hard at my writing.

In any case, this morning’s interview focused on the story I’m getting read to work on for NaNoWriMo. After all, we’re coming in for final approach to NaNoWriMo. What else would I be thinking about?

Are you getting nervous? I am. Obviously, I’m getting nervous, right? I mean, I’m driving down the road at 6:20AM talking to Terry Gross, who isn’t even there, about a book I haven’t written yet!

I really like the story I have in mind, and this probably the source of my nervousness. I’ve written before about taking notes, making character sheets, writing backstory, etc. Certainly I’ve done a little of that, but my hands keep wanting to find the keys that tell the real story. They’re itching to get rolling and see what lies around the first bend.

This tends to happen whenever I’m close to writing something that I know I’m going to enjoy working on. So, when I get a little frenetic about a story (and having fake interviews in my head is a good sign I’ve reached the tipping point), I like to take a bit of a breather so I don’t burn myself out or fret so much about the story that I just seize up on it. Part of my relaxation routine this week involves reading. I’m also looking to get as much sleep as I can since I’ll be getting up early to work in my extra writing time.

Now that I think about it, I may try to get out for a walk in the woods too. We’re just feeling the first brush of winter here. The air is especially invigorating.

14 thoughts on “Getting Some Fresh Air”