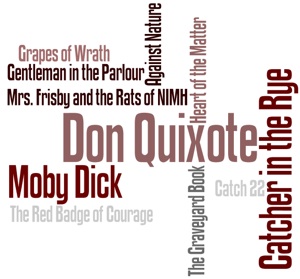 When you’ve only got a title for your story, the whole world is open and free and wonderful. You don’t have to worry about plot threads that make no sense. You don’t have to fret about characters who won’t do as their told. No, when all you have is a title, your story is perfect bliss, just a shade more substantial than an idea.

I’m the sort of writer who likes to have a title before I begin working on a story. It doesn’t always happen that way but for the most part I have some sort of title before I begin pecking away that the keys. Sometimes the title comes right away and that makes things easier (at least I know what to save the file as, which is a start).

But what happens when the title won’t come? Do you stress out about it? Does it keep you awake at night?

The title for my NaNoWriMo novel is The Fantastic Adventures of Kip Frazier, but the nugget of an idea from whence this title was born, has like sixteen different variations. Since I added the title to my Wrimo profile, I changed it three times. Small changes to be sure, changes that really mean nothing to the actual draft of the book.

I find that having a working title for a story often influences the style of my writing. I know this sounds sort of odd, but when I write I tend to fall into character as I work and the title helps me get there mentally. Sort of like a series of rituals helps prepare the mind to receive cosmic goodness.

Without a title (or one I particularly like), I futz about in a haze of uncertainty. I get frustrated. I get snippy with the characters. There’s a real danger here that I might actually destroy the whole thing. Of course, it’s entirely possible to hang onto a title for too long. Let me give you a few practical examples (because Kip Frazier is a title I am very happy with).

Deepest Shade is a story I’ve struggled with for close to 10 years. It’s been many things during that time but one thing is absolutely certain: Deepest Shade has always been the title. Or, at least I think it is. I’m still not entirely happy with Deepest Shade as a story. I think I really have two different tales going on not to mention the fact that I completely over edited the thing and now it feels sort of lifeless. Yet, I wonder if I haven’t hobbled the story by forcing myself to stick with a phrase that keeps clinging to my brain.

There are other stories in my archives like this one, stories I’ve wrestled and tried to fit into the title I’ve found myself infatuated with. A few posts ago I put up a chapter from my last book Revisions. The original title of the book was The Man Who Forgot Language, which is about as horrible as a title could get. When I wrote it down, I used it as a placeholder for a filename. Eventually, I went about seeking another title, which became The Slaves of Burt Thompson. Again, wretched, but it kept me going on the story (and in fact shaped the plot a bit (if I can call it a plot). I settled on Revisions long after the final version was done and put to sleep in the depths of my hard drive and I like it. In fact, I like the title enough that I may even dig out the manuscript some day and fix all the things that are wrong with it – mostly by starting over. 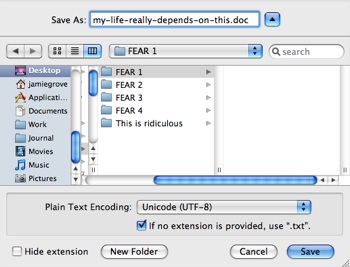 The point of all this rambling is that I want to show you that titles are important for many reasons, but I also want you to see that you can change the title anytime you want. If you’re struggling for a title for your NaNoWriMo book, you could do a lot worse than just calling it BOOK. 🙂

11 thoughts on “The Terror of Titles”