Dan is a young British writer, humourist, and critic, with a sweet collection of plaid shirts and a moustache tattooed on his finger. This will be his (fingers crossed!) third year of Nano success, and first year acting as a Municipal Liaison, for the Milton Keynes region. As well as writing, he enjoys reading, listening to music, telling people he doesn’t own a television, drinking heavily, and shouting. You can find him on the Nano site, or read his website, where he writes mostly about his life, and things he doesn’t like very much. Some people even find it relatively amusing! 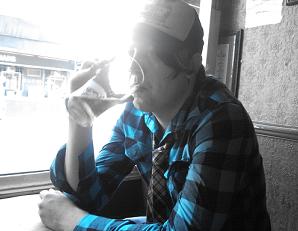 If you’re pretty much on target in your Nano-ing, you will have just passed, or will be about to pass, the 30,000 word mark. At which point, you enter into a horrible limbo of self-doubt, loathing for your work in progress, and you generally have the toughest-to-write 10,000 words of the novel just ahead of you, a seemingly insurmountable task compared with the thought of writing five times as much back on November 1st. Here are some strategies and thoughts which I hope will help get you past this bump in the road, onto the home stretch, and through to the 50k finish line!

First of all, realise that this is a perfectly normal thing to be going through, be you a virgin or veteran of Nano. Everyone else experiences this to a degree, and it’s totally fine. This section of the novel is always the hardest: you’re past the initial excitement of going on a new writing adventure, have cleared the ‘halfway high’, and at the same time, you’re not quite close enough to the end to have the goal in sight, and be able to push through to that.

So, you end up procrastinating even more than usual, your writing pace slows to almost a standstill, and the whole thing seems just too hard to manage. Why did you ever think it was a good idea to do this (again)?! You could always just stop, it’s not like you have to complete it, right?

But don’t give up just yet! It really isn’t as impossible as it seems, and once you’ve gotten through this painful phase, it’s really easy, as you ride out the home stretch from forty to fifty thousand words. I promise!

It is not a waste of time, it’s a brilliant endeavour – I know at least one point in my first year, about 35k in, I felt like my novel was a crime against the English language and the concept of a ‘story’, and that I was wasting my time. Then I was reminded that this is a challenge – it isn’t supposed to be easy, nothing worth doing is. This particular challenge is one to be particularly proud of when you have succeeded at it, so keep going and finish it!

Accept that sometimes your writing will feel laboured, ‘clunky’, awkward, or just plain BAD. Perhaps you’ve said the exact same thing three times in a row in different words, or maybe your padding in a particular scene is blatant and shameless. But there will also be times when you write a sentence or two, or even a paragraph, which you are genuinely pleased with. Remember these moments, rather than the hiccups you may have also had. And I assure you, your writing is never as bad as you think it is.

Don’t re-read until you have written ‘The End’ – at least not any more than the last paragraph, just enough to carry on after a break from writing. You will only nitpick and find faults, or be overcome with the urge to edit it ‘just a little bit’ – DON’T! On a similar note, don’t be too bothered about consistency throughout –you can always fix this later. Who cares if it was uncle Albert in chapter six and uncle Alfred in chapter seventeen?!

If you’re not enjoying writing it, move on quickly – Some sections will be a little boring to write, but are necessary to move the plot forward (assuming you have a ‘plot’, of course…) If you find yourself flagging a bit during one of these, end the scene as quickly as you reasonably can. Get it over with and move on to the next bit which will hopefully be more fun to write. Do the same if a particular section feels like it is getting a bit too long for its own good. You can always flesh it out or prune it back later!

Plan ahead, but not too far – and don’t be afraid to go wildly off course either. I recommend having a vague idea of where your novel will end up, and making little notes as you go along about upcoming chapters and what will happen in them to get to this end point. But at the same don’t be afraid to completely ignore these when you have a much better idea en route. As some Scottish bloke once said: ‘The best laid plans of mice and men, quickly go down the toilet as far as Nanowrimo is concerned’.

Print it out, even if no one ever reads it – when you reach 50k words (and then the end of your story about a hundred and seven words later!) the first thing you should do, after punching the air and shouting ‘I did it!’ ecstatically, is to print out a copy of your (not-so) masterpiece. That sure is a lot of paper, isn’t it? Now, flick through all the pages of your novel and say, ‘I wrote all of this’. And be damn proud of yourself.

And then plan to do it all again next year…