Scott Roche is a computer technician, a husband, a father of three, and one day hopes to be a published novelist. He has a blog or three floating around the internet, but the one he devotes the most time to can be found at http://www.spiritualtramp.com/. He is also podcasting his 2006 NaNoWriMo novel at http://www.archangelnovel.com/blog/. He is always looking for new things to write about and as a result has would up writing for sites like http://mine.myxer.com/ and http://www.hollywoodjesus.com, reviewing movies, music, and looking at pop culture through a Christian lens.

Fear is the Mind Killer 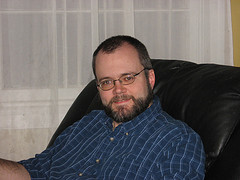 My very first attempt at doing NaNo was in 2005. Prior to that auspicious month I had written a fair number of short stories of varying lengths, but most of my writing efforts were non-fiction. I wanted to challenge myself to write something really big both in scope and in size and it seemed like this project was just the ticket. Ordinarily I’m what you might call an organic writer. That is if organic is French for “someone who fears planning”. Writing a novel seemed like eating the proverbial elephant, but I put the fear away. I went at it like any inexperienced author and tried to get it all in one bite. Naturally, I failed utterly, but the attempt had been made.

The next year rolled around and I went in to it with my eyes wide open. I planned to a degree unheard of before, for me at least. I prepared a chapter outline and some character sketches. I considered what sort of tone I wanted and really gave the whole thing some serious thought. For all of that pre-work though I was still afraid. When you write a lot of short stories, or perhaps more to the point when I write a lot of short stories I get used to that small space. I developed a sort of agoraphobia, only this was more a fear of big open pages. If I couldn’t resolve a story in less than five thousand words, would it ever draw to a close? The challenge was to continually remind myself that I had as much room as I needed. You know all those long nights and playing catch on weekends that you hear about? I had them. For all my planning characters did things I didn’t expect and new ones popped up unbidden. Still, I was glad for the planning. I crossed the finish line on the last day and then about mid-December I actually finished the novella. I knew then that I could write long form fiction.

I skipped 2007 thanks to some personal issues, but was determined to really give 2008 a solid try. I was podcasting my 2006 novella and working on its sequel and we’re scheduled to move in December, but I didn’t want any of that to stand in my way. I planned a little less, but progress is seemingly smoother. My fear of the white space is gradually diminishing. I let myself have chapters that savor the setting and characters, without rushing through them to serve the plot. I decided to do a number of things this year that I don’t ordinarily try. I’m limiting my point of view. The tone is overall much lighter than most stories I’ve written. In years past the challenge was just to cross the finish line, but now that I know I am capable of that I want to push myself in new directions, confront new fears, and take everything to the next level. That’s what this month is about for me, taking those writing fears and flipping them over, making them work for me.

People may tell you that anything you accomplish during this month is going to be really crappy. I mean you’re writing at a pace that most people can’t even comprehend. What if what you’re writing is horrible? This is perhaps the biggest fear I still face. A lot of the writers I meet have all the self esteem of Penfold the Hamster. I’m no different. Instead of letting this stop you, give yourself permission to be bad so long as the writing gets done. After all, a bad novel might be able to be edited into a good one. The one that stays stuck in your head will never do anyone any good. Don’t let fear, whatever it may be, kill your mind or stunt your story. Let it push you to the places that people tell you that you can’t go or that you tell yourself you shouldn’t. You’ll be glad you did.

4 thoughts on “Fear is the Mind Killer: A NaNoWriMo Profile”