Katherine is a computer science major in her junior year at Keene State College. She divides her time between New Hampshire and western Massachusetts, where she lives with her amazing plot-helping boyfriend and three cats. This is her second year doing NaNoWriMo, and though it has been an unusually stressful time due to recent deaths in her family, her friend the Procrastinator has helped to keep her calm and on track with her word count. You can find her on the NaNo website or on her blog. 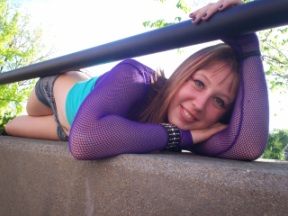 I was going to start writing this post yesterday, but just like my NaNo, I stared at the screen for a while before discovering that I was doing something else. Even though that something else was homework, it was still not what I had intended to do. You’ve probably guessed my topic: procrastination. That and writing without writing.

What’s writing without writing? Is that possible? To me, it’s the opposite of the advice that I hear from so many writers during NaNo, namely, “Just write! That’s the only trick, just sit down and force the words out, no matter what they say!”

That’s probably good advice for a lot of people, particularly those who fight fiercely to keep the inner Editor under control, like I do. I blame my OCD for my total inability to let a misspelled word sit and stare at me. They mock me. I fix them. I admit freely to that. Beyond that, however, although I have been guilty of erasing a sentence here and there, I stick to a rule for editing: if I absolutely must change something, the new version has to be longer than the old one. I read that rule somewhere in the NaNo forums and it has worked wonderfully for me.

The inner Editor, you have probably noticed, is good friends with the inner Procrastinator. They assist each other in their jobs, sort of a you-scratch-my-back, I’ll-scratch-yours thing. The Editor scares you into procrastinating by making you think too much, while the Procrastinator fools the Editor into thinking that by you doing nothing, when you do eventually do something, it will be better, more pleasing to the Editor’s excruciatingly high standards.

Recently I’ve discovered, to my delight, that I have a way of tricking the Procrastinator into helping me. It’s a tricky task, for if you do it wrong, it will work against you. But think of that absolutely mindless thing you do when you should be doing a thousand other, more useful things. Is it knitting? Playing solitaire? Reorganizing your desk in a myriad of different patterns, all of approximately similar usefulness? For me, it’s playing poker online. It requires no effort, no thought, just me sitting and staring and accomplishing nothing else. (Hey, I didn’t say I actually won anything.)

My discovery is that while I play poker, because it is so mindless, I can think about other things; and with just a little bit of focus, I can bend that thought around to my novel. In pleasing the Procrastinator (by playing poker), I also please the Editor (by doing a little planning), and yet I’m helping myself, too. The tricky part is not doing it too long. After all, if I’ve been playing poker for five hours, I’ve probably run out of time in which to physically write down the scenes I’ve thought up. But if after half an hour, I pull myself away from the virtual table and open up that nagging Word document titled NaNovel2008, the build-up of recent thoughts just pours out on the page.

I never thought I would have reason to thank my Procrastinator, but I have to say it: thank you, Sir P., for insisting that I play mindless internet games. You are more helpful than I’m sure you ever wanted to be.