As part of my NaNoWriMo Halo Giveaway, I offered all of the folks who signed up a chance to write a guest post for How Not To Write. I’ve expanded the offer to any and all Wrimos who would like to participate. I think you’ll be amazed as I was at the variety of people who have submitted posts. I know I am. I’m also proud to share their words here and I hope you’ll take a moment to leave a comment. — Jamie

By day Elise Koerner saves the world one IT system at a time, at night she tries to write. Her day job has taken her to some pretty unique places and in the last eight months she’s been lucky enough to visit Australia, Singapore, China, Brazil, Sweden, Denmark and throughout the US. Though the travel has given her great stories and ideas of future best sellers, she’s been using the travel as an excuse to not finish anything she’s started. Truthfully she’s really good at coming up with excuses but after Nano (not an excuse she swears) she plans to start (and finish) the first book in a travel-centric YA series she’s been developing for a long time.

How to Use Your Excuses to Fuel Your Writing 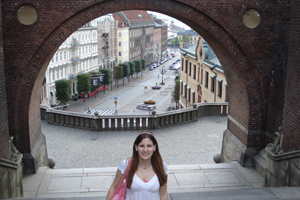 So I’m sitting in work training listening to our instructor go over this project management stuff (critical path and Gantt charts, actually, how thrilling does that sound?) that I’ve already been taught before. This training is at least the third time in the last sixteen months I’ve calculated PERT and I want to gouge my eyes out, it’s just so boring and redundant. I have no computer, no notepad, no pen, no cocktail napkins, nothing. I’d much rather be doing Nanowrimo writing then sitting in the conference room being bored to tears sticking post-it notes over every surface of the room as part of a learning activity.

That’s an example of something you can’t avoid. It’s an excuse, but it’s legitimate. I say, I would have been able to write my daily 1,667 words if only I didn’t have training. I can’t really go to my boss and say “Sorry, its November and I’d rather be writing right now so please tell them to make an exception. Training really isn’t important anyways…” I’m pretty sure that isn’t going to fly – after all, my company has made it painfully clear that if we whip out a laptop or look like we’re not engaged we’ll be penalized. As in no reward stickers. Seriously, this is Corporate America and some Human Resources study shows twenty-somethings learn better if training closely resembles kindergarten. Though I’m fairly convinced we’re being graded on our Pavlovian willingness to do shameless sucking up for these stickers and there might be a direct correlation to our annual raises… Anyways, that’s not the point.

The point is, we all have mandatory things that must come first in November, and all year round. My two weeks of training is a good example. Nanowrimo is important, but if I’m a homeless bum without a book deal then I’m really screwed. But lucky for us there are two main types of excuses – number one is mandatory life-or-death stuff. The other is called procrastination temptation and the best part is we can do something about it.

On Saturday I found a cute sweater on-line (when procrastinating Nano writing) and decided to avoid shipping and handling costs I’d convince a friend to go down the mall with me and see if I could find in it a department store sans shipping. So I picked up my friend, drove to the mall, went to the stores I wanted to go into for this sweater, then hit up a few others. Then Starbucks, then on my way home got gas and decided to pick up food for dinner and well, four hours later I didn’t have my sweater, and didn’t have 1,667 words written. I didn’t need the sweater, the world wasn’t going to end if I didn’t have it. I just started procrastinating and let myself be tempted by the fact I had been doing so well with Nano. I kind of forgot the most important thing – November is for writing (it’s NANOWRIMO for goodness sakes).

We all have our temptations, in November it’s sometimes hard to make the time just between the holidays and family stuff. I know some people say they locked themselves in their apartments and friends and family just had to understand. I don’t see that as being reasonable though. There are going to be things that come up – mandatory life-or-death stuff along with procrastination temptations and you’re going to want to write instead. You are going to say afterwards if I only had those four hours back or the only reason I’m behind is because my friend dragged me to the mall to look for a sweater that apparently doesn’t even exist or [insert weird set of circumstances here].

Basically there is absolutely, unequivocally always going to be some reason not to write. It’s like Murphy’s Law. Whether it’s a legitimate excuse or not is the question you need to ask yourself. Are you not hitting your personal writing goals because something more fun or interesting has come up, or because you had to study for a test, take the dog to a Vet, go grocery shopping, whatever? Only you know what’s imperative, but you need to evaluate how you spend your time and if the diversions from writing are really worth it. Prioritize the procrastination. Even if the end result is only adding 100 words to your story on the day they keep you in the conference room for training until 9pm, or on a good day 2,000 when you fight the urge to watch a marathon of America’s Next Top Model. Now if your one of those people who actually forgoes meals and skips work to write, sorry I can’t help you. But if you’re reading this, you’re probably not – you’re like me and have real life and sometimes it gets in the way of your writing.

But there is a way to turn it around and make it help you – call the time you’re not writing “research”. When you’re sitting in training watching your peers argue about the difference between a Technical Writer and a Developer you can think of how ridiculous the argument is and mentally map put a scene like that between your characters. Or when your running around the mall searching for a very specific BCBG sweater that no salesperson believes exists, you might just think up a plot twist involving an item only your main character can see. At the Doctor’s office you pick up a magazine you never heard of before and read an article that helps shape your sub plot. You stay up late and watch an old episode of the Twilight Zone and decide to name a character after Rod Serling (using an acronym of course). Whatever it is, sometimes those distractions help us with our writing. And if not – maybe the next distraction will. 🙂

8 thoughts on “How to Use Your Excuses to Fuel Your Writing: A NaNoWriMo Profile”