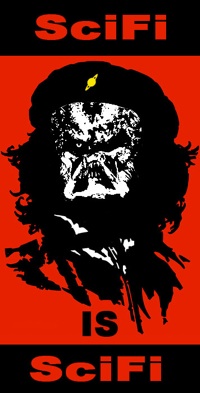 This morning, I heard that the Sci-Fi Channel decided to rebrand and call themselves SyFy. At first, I had to check the calendar to make sure it wasn’t April 1st. Then, it sunk in.

I read the New York Times article and my jaw dropped…

Really? Is is all about owning a name? I thought it was about creating good television. Silly me. I forgot how this works, but now I’m starting to remember.

Recently, I read a similar bit about the Cartoon Network executives chomping at the bit to get some more live action on their channel. They felt it would boost ratings. Live action? Uhhh… it’s CARTOON NETWORK, folks. Silly me, right?

If the folks at NBC no longer want to own scifi.com, I’m happy to take it. I’ll even pay for the domain transfer fee. No problem. Trust me. I’ll take good care of it. I won’t try to rename it or make it easier to text (because four characters is sooo much easier than six). I won’t even try to compete with the new SyFy Channel as I’m sure that after the rebranding anything resembling Science Fiction will be removed from the network.

Or has that already happened?

Today, I created a group on Facebook to protest this change. Pretty soon a number of friends came in and Wrich Printz posted this comment on the wall:

I really wish they would focus more on good shows, and less on copywriting.

When AMC can do Mad Men, and Breaking Bad (Two asskickers of shows)…there is no reason that top notch SF cannot be produced and served to the public more frequently, by Top 4/5 channels.

Changing their name to SyFy is not going to suddenly improve their content, or make them more than an aggrigator of C movies and fake ass ghost shows.

Yeah, so maybe it doesn’t matter. Maybe the SciFi is already gone from SyFy and the name change is only the formalization of an ongoing process.

For years I’ve called a certain type of speculative fiction “skiffy.” For example, the remake of “Day the Earth…” Skiffy.

I like Skiffy. It’s funny and it’s meant to be used by people who know better to make light of things like SyFy. People like Melisa Michael of the SFWA:

I believe it was in the sixties that I was first told (quite firmly) that one does not say “sci-fi” when referring to what I thought was called sci-fi.

“Sci-Fi means bug-eyed monsters,” I was told. “B movies. The Blob. Hollywood.”

Her essay was written way back in 1996 and ties into a conversation stirred up by Damon Knight on the term sci-fi. The thoughts of many authors are archived on this page. I think my favorite of the bunch is from Eileen Gunn:

Eileen Gunn: I think “sci-fi” is a very useful term — it can be used straight-forwardly with people who don’t have negative associations about it, and it can be used offensively, sarcastically, or ironically with them that do.

What does do with SyFy? Is it useful?

The Revolution Will Not Be Televised

Matt Staggs has an excellent post on the subject of Geek Militancy over on Enter the Octopus.

Rather than being helplessly weak and socially handicapped, geeks, weirdos and eccentrics have always made things happen in this world. We are the font of all innovation. We aren’t scared to wander away from the safe confines of the campfire and return with the bounties of art, science and culture. Prometheus was the original geek, and all of us are his children. The linear thinkers, desperate conformists and dullards of this world need us, and deep down, they know it. They ridicule and point fingers because they’re afraid if we realize we’re the givers of culture and science then we’ll start demanding what’s rightfully ours. And what is that? What is rightfully ours? Respect.

You have to hand it to the massive marketing geniuses at SyFy. I mean, after all, who would want legions of trekkies and nerds flocking to their network?

It’s not like this demographic is generally employed in some of the best paying fields in the economy. It’s not like they worship the genre or anything. No, let’s just trash all that and go for the bling. Let’s get some real high-end advertising.

Getting back to Eileen Gunn’s comment, maybe that’s the best thing to do… Keep calling SyFy The Sci-Fi Channel regardless of the multi-million dollar rebranding effort under way. Keep calling it Sci-Fi channel because the people who want to change it have some negative association with the term. Keep calling it Sci-Fi because we are the Children of Prometheus, as Matt suggests and we’re going to stick it to the gods who think they know better because their focus group tests tell them so…

Or maybe it’s time to join my revolution… 🙂

What do you think?

Update: Check out Randy Henderson’s: 16 Reasons Why Sci-Fi can go SyFy. That’s not the name of the post, but it ought to be. 🙂

14 thoughts on “SciFi is SciFi not SyFy”