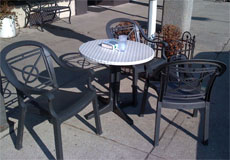 My “office” yesterday. Trust me, it’s really harder than it looks.

I’m sitting in the cafe It’s March, and the last three weeks have been both fun and nerve wracking and to a certain extent bemusing.

When I launched my personal website (which sounds totally ludicrous, I mean, if this isn’t personal what is?), I put up a post proclaiming to the world that I was using a once in a lifetime opportunity to dedicate my life to writing. Right after that, I promptly stopped writing.

Pretty much par for the course, wouldn’t you say? After all, the site is called How Not to Write. 🙂

I should be clear here. When I say I’ve stopped writing, it doesn’t mean that I’m not writing at all. It means I’m not writing every day with a sense of purpose. I’m not “on project.” So, I’m writing, but I’m all over the map.

Part of this is just the natural process of switching from one frame of context to another.

Before, I had time set up specifically to write each day. Maybe not enough time, but it was steady. I had purpose. Now, time is not so clearly defined.

I know how this works because I used to work for myself a long time ago and so getting into the right structure is a question of strategy, focus, and discipline. The problem is that I’ve got too many strategies, which dilutes my focus and strains my natural discipline. Admittedly, my “discipline” is a little hard for other people to understand but it’s there (post picture notwithstanding).

This isn’t going to be one of those posts where I talk about getting back to what’s really important. I read those from time to time on sites and I think of all the times I wrote those exact words in my journal. I think of those entries (and there are literally hundreds over the last two decades) and it makes me cringe…

So, no, this isn’t going to be one of those posts.

I have a lot of entries like this too. Entries that talk about how rage-fuelled writing leads to a massive flurry of activity.

Just look at my last entry here on How Not to Write. I went off about a television channel changing it’s name. Do I even watch television? Who wrote that?

I did, and that’s why I’m writing this post.

Change is a Process

Since my change, I’ve had an opportunity to talk with a number of people about the shifts in their own lives (current and past). There are common threads there. People talk about how all the planning in the world doesn’t really prepare you for the oceans of possibilities waiting on the other side of the steady schedule. How it seems like every lead needs chasing down.

The simple fact is that change is a process.

For writers, this should seem like natural advice. When you are crafting a piece of fiction, you’re bound to run into idea overload. New ideas crashing into the old, piling up like unfolded laundry. As you learn to write, you learn to deal with this idea overload. You develop a process.

Some writers (like me) take notes. I write the ideas down so that I can move through them and then get back to work. I don’t stress about it. I just do it. That’s my process. Sometimes these ideas become stories of their own, but generally they just go into the canon and become part of the larger whole. Like I said, it’s a process. One that you may not wish to examine too closely lest you disrupt the magic and make the process the purpose.

There are some things we simply must accept because until we accept them we cannot move on to what’s next.

I am moving into a stage of acceptance. Knowing myself, I also know that this is often followed by an intense period of deep creativity and productivity. I’m not quite there yet, but I’m close. The prospect of this is exciting because in the past this is when I’ve done my best work.

My best work is not necessarily the production of a great story or even a decent idea. My best work is growth. It is taking what I’ve learned and experienced and learning from it. It is the beginning, which is always an exciting bit, don’t you think?

10 thoughts on “Accepting the Process of Change”