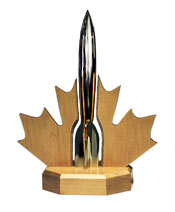 This year’s Hugo Award. Correction: This is the Torcon 2003 award. Thanks, Geri! Guess I was a little slap happy after looking up all these links.

Below are the Hugo Award Nominations for 2009 without the television and movie stuff. The link love is that I’ve gone out and found every author/artist announcement post. Yeah, my GoogleFu is going to be sore in the morning. 🙂

If you see a little [?] next to the link, that means I couldn’t find the author’s official announcement and I’ve just linked to their blog/press site.

* “The Erdmann Nexus” by Nancy Kress (Asimov’s Oct/Nov 2008) [Update that blog, Nancy! 🙂 ] * “The Political Prisoner” by Charles Coleman Finlay (F&SF Aug 2008) [I think CC and I are writing within half a mile of each other. Charlie, stop by Staufs and I’ll buy you a cuppa joe. Congrats!] * “The Tear” by Ian McDonald (Galactic Empires) [Thanks for updating, Ian!] * “True Names” by Benjamin Rosenbaum [Ben wins best Hugo Nomination Picture Award in my book.] & Cory Doctorow (Fast Forward 2)
* “Truth” by Robert Reed (Asimov’s Oct/Nov 2008) [?]

* Rhetorics of Fantasy by Farah Mendlesohn (Wesleyan University Press)
* Spectrum 15: The Best in Contemporary Fantastic Art by Cathy & Arnie Fenner, eds. (Underwood Books)
* The Vorkosigan Companion: The Universe of Lois McMaster Bujold by Lillian Stewart Carl [?] & John Helfers, eds. (Baen) [? Umm. Updates?] * What It Is We Do When We Read Science Fiction by Paul Kincaid (Beccon Publications) [?] * Your Hate Mail Will be Graded: A Decade of Whatever, 1998-2008 by John Scalzi (Subterranean Press)

* Argentus edited by Steven H Silver
* Banana Wings edited by Claire Brialey and Mark Plummer [??] * Challenger edited by Guy H. Lillian III [?] * The Drink Tank edited by Chris Garcia [Thanks, Kevin Standlee] * Electric Velocipede edited by John Klima
* File 770 edited by Mike Glyer [? Mike doesn’t have a specific post there about his nomination, but some great thoughts about the nominations in general.]

Whew!!! Yeah, it took awhile to get all these links together. Have fun!!!