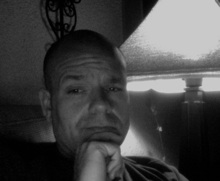 Excuse the faux-artsy photo, folks. It’s the first nice night of Spring and I’m out on the porch enjoying the weather. This is the best I could do in such low light.

Those writing lessons might be the ways in which your blog writing style has changed and developed, new forms that you’ve tried, or writing experiments you’ve done off the blog as a result of feedback and interaction with your community.

With my recent change still looming large, I’ve spent a little time reviewing how far I’ve come in the last year. And, in perhaps one of the biggest coincidences of all time, I received an email today from a new reader asking me about a post I wrote nearly a year ago, “What to do when the one you love hates your writing?”:

I guess the question I ask when I read that is, if you know she is going to hate it, then why do you make her read it? That’s like requiring my wife to watch a bunch of guy movies with me when I know she doesn’t like them, and then being annoyed when she still doesn’t like them.

F.R.R. Mallory asked basically the same question in the comments on that post. If you take a peek, you’ll also see that my comments in reply are still running under the name “editor“.

A year is a long time…

The community here at How Not to Write has grown, especially after I stopped hiding behind “editor“. I mentioned this transformation in “Why King Moonracer is My Hero”:

Perhaps this is the greatest lesson I’ve learned here on my blog: I’ve learned not to be afraid, even if I have no idea what I’m doing. I’ve learned not to hide, even when I’m bound to make a fool of myself. I’ve learned that being a part of the broader writing community is so much more than just retweeting posts and leaving comments. It’s about helping and learning, because a writer is never complete. It’s about learning to live and be happy with who you are.

17 thoughts on “A Writer is Never Complete”