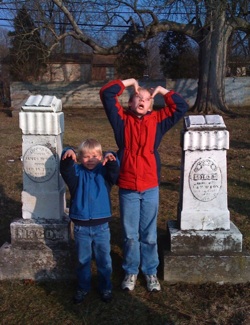 Chi-Chi and Brains doing their best zombie impressions for the fans.

Today, while I was out and about with my boys, we needed to find a place to get our car washed. Everywhere we went it seemed like there were hundreds if not thousands of cars in line for washing. Admittedly, this was the first nice day in a few weeks so every good Ohioan is bound to think that they’d better:

A) Chip off any ice remaining on sidewalks, driveways, or gutters… because it certainly won’t melt of it’s own accord on a sunny, 50F day.

B) Get their cars washed even though it is going to rain like crazy in two days.

C) [Optional for convertible owners] Drive around with the top down and the windows up.

D) Any combination of the above.

But then I had an idea.

Close to my house is a little service station. Only neighborhood people go there. We dropped by and sure enough we got right in line.

While I was sitting there, it occurred to me that I ought to tweet the occasion. For those of you unfamiliar with “tweeting” I’m not talking about being perched in a cage and singing my heart out (although I was sort of trapped in a car and blabbing so perhaps the metaphor is apt). I’m talking about Twitter, a little social service where you can put up messages of 140 characters or less where everyone can see.

Why would I do this? Do I really need yet another distraction from writing?

Well, for one thing, I tend to drink to much coffee and Twitter helps me get out all those words and quips that would otherwise clutter my journals and stories. This is a double-edged sword though as most people will tell you that my quips and caffeine-laden screeds are about all I’ve got. Excuses aside, I think Twitter is fun and I’ve met a lot of great people there.

So, there I was tweeting away on my iPhone when it occurred to me that the service station where I was getting my car washed was also attached to a 19th century family cemetery. In fact, I’d written a nice post about it a long time ago. One tweet leads to another and before I knew it I was putting on a little show: my car wash, the bizarre juxtaposition of some hard-working (though thoroughly dead) farmers, and the power of the Internet to share it all in real time.

Now that I’m home, I thought I’d share this bit of fun with everyone else as a sort of example of how you can work social networking tools into your blog and maybe get a few people to read some of your favorite posts. 🙂