Today’s Writer Profile comes from Matthew Rowe, who has a website with a URL that makes him a good fit for How Not to Write. 🙂 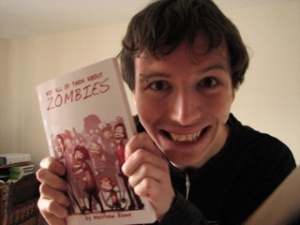 Now there’s a happy writer and his book! Congratulations!

Matthew Rowe is a recently short-haired, neurotic lay about who is currently unsure of his place in the world. He hopes his book of short fantasy, horror and comedy stories, Not All Of Them About Zombies, available very cheaply through Amazon, will go some way to asserting himself somewhere. He has written a lot and he wants to share it all, but no one with the money or power has let him as yet. He’s only in his late twenties though so he remains foolishly optimistic. Some people think it is endearing. He would also like you to know that he has a shiny new website (www.mattcannotwrite.co.uk) where he blogs (almost) daily and a Facebook page with not enough fans.

Writers face a lot of problems in their eternal struggle to shape some dirty marks on paper in an emotionally and intellectually satisfying arrangement. I couldn’t possibly go into them all and emerge on the other side with a coherent selection of sentences so I’m going to talk about my biggest problem: Life. Now, don’t get me wrong; I may be relatively young, but I’m not one of those whiny Emo, grunge kids that pollute our gene pools nowadays. It is simply that there are aspects of life that keep getting in the way of writing.

Ideally, I would like to write non-stop, forever. Nothing makes me happier than to be in control of my own little world where all the characters are my friends, even if they are ego-maniacal geniuses with plans for world domination and problematic love lives or undead monsters recently crawled out of a too-shallow grave and looking for a pet dog that died in the car accident with them (Ooh that would make a good story. Dibs!). Unfortunately though, I have to eat, I have to sleep and in order to successfully manage these other two main goals in life, I have to provide money to buy food in the first place. Writing doesn’t do that. It could, because (like most writers) I truly believe there is a market out there just waiting, dying even, for my special brand of supernatural comedy fantasy and biting, satirical dark fiction, but my exasperated jumping about and arm-waving has failed to attract the attention of any bigwig publishers as of yet. So, I have to look for an alternative way of earning money, and balancing this other career with my ‘true’ career as a writer is difficult. I’ve been trying for several years and still not figured it out.

At the best of times, I have long periods of productivity in my writing that is then broken by a long period of bread earning. At worst, I become so exhausted earning bread that I do not do any writing, and so at last we reach my key point. Worse than Writer’s Block is the emotional torment of trying to start writing again after a long period of inactivity. Sure, I may write each day in some basic or creative way (my blog, for example, or an idea for a short story might strike me, in which case I start writing the intro or a key scene immediately), but if I don’t keep working on my novel, or whatever my current main project is, it becomes a nightmare to try and get back to it.

I love writing, I really do, but I have wasted endless hours sitting at my computer, thinking that whatever I write is bound to be crap because I haven’t written properly in ages, or that I’ve lost whatever little subconscious ideas were floating around in my brain just waiting to develop into the zygote of a plot point all those weeks ago and I don’t want to start until I get them back. Inevitably, I do write, maybe an hour later, maybe several days later or longer, and always after much mental torture, but I always feel bad for the break in the flow and wonder what direction my project would have taken if I had carried on with that initial burst of enthusiasm. Then there is the anguish as I force myself to sit at the computer to try and get something else only to give up with the same excuses, or perhaps I do write something and wonder if it is good enough to continue.

It could be argued however that this time of inactivity is useful, if difficult, because I have often become aware of brick walls that I cannot climb even when I know what goes on beyond them and the time away has allowed me to dwell on this, dig around in my shed for a ladder and return to the wall to prop the trusty ladder up against it. Yet I have to return to the work the instant I solve it, because if I don’t, I’m back to that unproductive void which could be likened to pouring distilled boredom into my ears and waiting for the punch line.

That, dear reader (and, indeed, I presume, writer) is why I hate life. If it wasn’t for life I’d be able to work on my novel until I finished it, happy, content, satisfied, but alas, probably dead from starvation, if not dehydration, in a very disgusting puddle of my own lazy excrement…..

Still, I ask myself which eventuality is better.

So here I am, guest writing on someone else’s website, asking you lovely people how you balance your life with your writing. I always feel that I often give into peoples’ expectations of what I should be doing with my life (and by ‘people’ I mean ‘my mother’) and that this has greatly delayed my progress in writing. Should I have concentrated more on completing my novel or was it a smart move to go to university, for example? Also, I ask myself now, having just completed a TEFL course, if concentrating on finding a position teaching English abroad is going to detract too much from completing my second novel. In one respect I think I am stretching my last chance to earn anything with the debts I have incurred and I am unsure of any other way to earn money, feed myself and stay alive to be able to write, but I don’t want to go another long period without writing much. Certainly then, if the job hunt doesn’t keep me away, adjusting to life in another country probably will. Perhaps this is a skill that comes with time, or maybe I need to shout “Buggerit!” buy a big padlock and not come out of my room until someone comes knocking with a publishing contract/movie deal/Booker Prize/lots of beautiful women who get turned on by successful writers/all of the above. After all, it is called ‘bread winning’ so can’t someone just hand me all the damn bread and leave me in peace to churn out another potential bestseller? No, apparently not.

The worst part is, thanks to all positive reviews and feedback, knowing there are people out there who would buy my work, and that it could be really successful, but having to make this decision anyway. Part of me wishes someone would just tell me one way or the other if I’m ever going to get noticed. If I do then great, I can look forward to a day when I don’t have to have two careers. If not then I wouldn’t stop writing, but I wouldn’t worry so much about prioritizing it when I could make a really successful business for myself teaching small foreign children the meaning of “By’eck, Nora, I could murder a cup’o tea cos it’s brass monkeys out there”.

Interested in sharing your profile with other writers? Find out more here. Oh, and please leave a comment on this post, cause you’ll want others to return in kind when your smiling face appears on HNTW, right? 😉