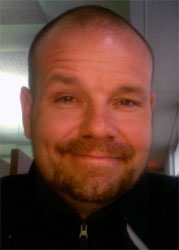 “… a little silly, a little strange, and a little WTF thrown in”

“It Likes Italian” is a short screenplay I’ve had kicking around in my head for awhile. If you want to get to the action, got ahead and skip down to the header below, but I thought I’d take a moment to talk about the process of writing this screenplay because I’ve never actually done one before.

Of course, this won’t be a surprise to the screenwriters in the house as I’ve totally botched the formatting. 🙂

In any case, blasting out reams of dialogue is one of my oldest methods for starting a new story. I just sit down and let a group of characters start talking. Eventually, they tell me what’s going on.

My work with Kip Frazier is a lot like this: he talks, I listen, when I interrupt he usually says something like, “Well, Mister Writer, you stick to the scribbling and I’ll stick to the story spinning, cause I’m sure ain’t nobody wants to hear it the other way around.”

And, as usual, Kip is right. My job is to write. The characters are supposed to tell the story.

Another thing worth mentioning about “It Likes Italian” is that it has a liberal dose of colorful language. This is a little different from things I’ve posted of late, but I’m also trying to get back to writing from the gut… And as the son of a man who was a sailor and then a cop, my gut often coughs up some rough edges.

Of course, this story is really me, through and through (a little silly, a little strange, and a little WTF thrown in), and that’s one thing I like about it.

“It Likes Italian”: A Short Screenplay

[Setting; Space] [Open with a small research craft orbiting a gas giant planet. Close by is an enormous black sphere, metallic and smooth.] [Interior of craft: One man is asleep at his terminal, while another pokes at the keyboard in a bored way.] [Terminal Screen close-up: Saying hello in different languages, math questions. A delay… nothing comes back in response. Bored man at the terminal (Roy), stops the script. Types in something and chuckles.]

Clay: “Huh? What do you mean, ‘It likes Italian?'”
Roy: “The protocols weren’t working so I tried flirting with it in Italian.”
Clay: “What the fuck do you know about Italian?”
Roy: “I spent a summer in Rome.”
Clay: “We’re supposed to be following protocol.”
Roy: “I know. I was just screwing around.”
Clay: “Keep running the scans…”
Roy: [sigh] [Roy goes back to running the scans, but there’s no response. He looks to see if Clay is watching. He’s back to sleep.] [Terminal: Roy taps in a few Italian phrases. The entity answers back.]

Clay: “Fuck. What are we going to do?”
Roy: “I guess we report in and say it likes Italian.”
Clay: “Brilliant, Jackass… That’ll look great on the report.”

Clay: “Jesus! Well, if it wants a response – respond!”
Roy: “What should I say?”
Clay: “I don’t know! Ask for directions or something!”

Roy: “Shit.”
Clay: “Now what? What did you say?”
Roy: “Well, I asked it if it wanted to sleep with me and it said yes.”
Clay: “Christ! Stop flirting with it!”
Roy: “What else do you want me to do? That’s all the fucking Italian I know. It’s all I ever needed to know.”
Clay: “I took some Spanish back in high school. Maybe we could try that.”
Roy: “I don’t know. I think it might not like that.”
Clay: “What the hell do you know? Now you’re the shrink?”
Roy: “That never worked in Rome. The girls there got pissed if you tried to switch to Spanish.”
Clay: “So now it’s a girl?”
Roy: “It wants to sleep with me, doesn’t it?”
Clay: “You don’t know that. Shit. We need to call this in.”

Roy: “It’s still closing.”
Clay: “Is it going to crash into us?”
Roy: “No, it’s on an intercept vector, maneuvering to come along side.”
Clay: “I’m calling in.”
Roy: “The communications array is dead. It’s jamming us.”

Roy: “It says it wants to be alone with us.”
Clay: “We’re getting the fuck out of here!”

[Exterior: The entity closes on the ship. Grapplers extend and clamp onto the ship.]

[Clay checks exterior monitors.] [Exterior: Something else extending from the entity.]

Clay: “Oh hell no. This thing is not going to fuck our ship is it?”

[Crash into the hull, grinding of metal.]

[Terminal: Repeating on the screen in Italian]

[Log beacon shoots out of the ship as the entity blasts into warp, taking the research vessel with it] —
[Some time later… A military rescue ship arrives. Picks up the beacon.]

Captain: “No sign of the ship?”
Ensign: “No, Captain. Just her log beacon, but the data is truncated. They must have jettisoned early.”
Captain: “What does it say?”

[Ensign works at his terminal.]

Thanks for reading! Hope you enjoyed it!

16 thoughts on “"It Likes Italian": A Short Screenplay”