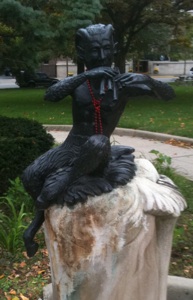 In just a few days, thousands of passionate writers will start down the path to writing a novel in 30 days. The goal is 50,000 words. Most will falter around 10,000 (or less). The reason?

Some people fall back on organization: outlines, meticulous planning, character sheets, etc. They spend hours thinking about the structure of their stories, running mental what-if scenarios. I know this because I’ve done it too, and for sheer volume it does wonders. On occasion, it even helps finish books.

That said, I’m going to tell you my secret. My secret is obsession. Obsession is how I get things done.

While working on Kip Frazier last year, my passion wavered around 20K words. I’d been there before, and I knew that some time spent working on structure would get me energized again. So I set about doing what I might have done at the beginning, which is to plan and outline.

Eventually, he just took over.

“Listen,” Kip said. “Nobody’s payin’ you to look pretty or be clever! They’re paying to see what I’m gonna do. You just scribble down what I tell you and it’ll come along just fine.”

And he was right of course. Kip is always right. So, I listened to Kip instead of trying to tell him what to do and the rest of the 50K came off without a hitch. I’ve since gone on to add another 50K to the stack and there’s more to come.

You might think that Kip Frazier should’ve been done a long time ago, but this is a project that will take years to complete. Years because I’m obsessed with getting it just right. Obsessed with keeping my nose out of Kip’s business and just letting him do the work.

Am I Obsessed This Year?

This year’s story is one I just couldn’t get out of my head. In fact, I was so passionate about it, I wrote a short story (which has not appeared anywhere yet). I just couldn’t let the idea go.

I was worried about this. In fact, last Saturday I wrote a post questioning the entire premise for my planned NaNoWriMo novel. That post is still sitting on my computer, a dead thing that withered away before it could be finished. It was a half-hearted attempt by my inner critic to try and silence the work before it even got started, but it didn’t work. I’m still thinking about that story.

Thursday night I woke up at 3:38AM. Wide awake. My head was clear but my thoughts were buzzing. I could have solved any equation put before me, crunched massive data sets in an instant. Hell, I was so plugged in I might have gone on to write a full page of text without a single typo.

But out of all that might have happened, one thing slammed into my brain: a name.

If I go back and look at my notes, I see no less than a dozen names scribbled in the margins but not one is right. Not one name is the One Name.

Then Thursday, when I was sound asleep the middle of a chilly October night, the One Name came and pushed me out of my sleep. It stood me up against the wall and slapped me across the face.

I’m awake of course and terrified. I feel like I’ll never sleep again, which is both exhilarating and nauseating.

The One Name is nose to nose with me in the dark. It brushes against my cheek and teases my ear with a slow intake of breath. I know what is coming. I know the One Name is going to reveal itself and tell me what I thought I might have lost. I know that I’m about to receive the gift of Obsession and that once I have it there will be no stopping the story.

And then I have it. And it is perfect. And I feel myself go limp and spiral back down to the bed where I find myself lost to sleep.

Yeah, I’m ready. Obsession will not be an issue. 🙂

Do you have plans for NaNoWriMo this year? Are you going to write from passion? Obsession? Organization? Are you waking up in the middle of the night? Are you ready? Are you afraid? Is the answer to all of these questions “yes”?