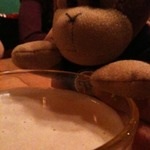 It was a dark night in Chicago. Eden was tired. She had to get up early. But there she was, biking across town to meet a man barely knew…

Sounds kind of scary, right? A decent setup for a pulp mystery or maybe some boring existentialist diatribe on the nature of meeting people for the first time. Well, the man Eden was going to meet was me, and while I’m not really all that scary in person, I’m probably good casting for the latter. 🙂

Eden Robins is a Clarion West grad, writer, and editor of Brain Harvest. I’ve known Eden for awhile, in the casual way one comes to know someone online, a tweet here and there, a message or two. In addition, Eden and Shane Hoversten the Brain Harvest crew did a critique for me not too long ago as well, so I was thrilled to finally meet her in person.

We had a great chat about writing, although I kinda felt like I probably blabbed too much. Still, there’s nothing like the camaraderie of writers. Where else can you talk about the strange ways and means of fiction and draw looks of understanding instead of confusion (or even fear)?

One of the most difficult things for writers to handle is the face-to-face discussion of their work. If you’re a regular reader of How Not to Write, you might think that I’m an exception to this rule, but you’d be wrong. I blogged anonymously for years (both here and elsewhere). I shied away from sharing my work with anyone except those closest to me and least likely to offer anything approaching criticism.

But a few years ago, I discovered that if you share your work with other writers you actually get valuable feedback, you improve. The same thing happens when you just talk abut the process with another writer.

Along this line, I had another conversation recently with a writer I work with. John Fraizer sent me a chapter of his work in progress and asked for my feedback. In talking about the work, we also talked about the process of fiction and even though we have different ways of working there’s such a powerful sense of validation when you hear someone describe their process and find your own to be strikingly similar.

Oh, and I have to give Kevin Blake a nod for the advice I passed on to John… “You’ve got a great story here, once you trash the first nine pages.” John didn’t have nine pages to trash, but I did on a story I wrote a long time ago. Kevin’s advice was one of the first I’d received from another serious writer.

I’d like to thank Eden for coming out to a very noisy bar after a long day. It was the highlight of my trip, which is saying a lot because a lot happened while I was in Chicago. I’d also like to thank John Fraizer for sharing his work in progress with me and for asking for my opinion of the work.

Say Hi To These Writers

What’s the point of having a post on meeting writers if you don’t actually go out and meet some?

Drop on by Eden’s blog and congratulate her for making M-Brane SF #9! Twitter: @edenrobins

On Fraize’s blog, you can let him know that NaNoWriMo isn’t insanity and that he should enjoy the process. It’s fun and he ought to enjoy it! 🙂 Ok, maybe it is nutty but it’s still fun. Twitter: @fraize

Kevin just launched White Belt Writer. He’s probably going to be pissed that I linked to it in this post, but hey… what’s the point of being a writer if you’re not going to put it out there and shake it!!! 😉 Twitter: @kevineblake

10 thoughts on “On Meeting Writers…”