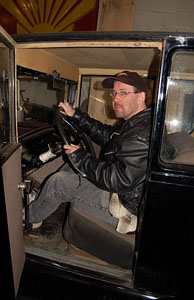 Tom is a Midwesterner trying to figure out how to get people to pay him for making full use of his creative talents. In his spare time he hones his skills by writing, building rolling ball sculptures, playing harmonica/singing in a blues band, drag racing, land speed racing, and working on photography. He figured he’d write a novel in 30 days, because he obviously doesn’t have enough other stuff to do. He is heavily invested in the creative process, which he blogs about at www.thatstom.com.

On Expectations and Doing the Work

I had it all planned out. I was hard at work on my NaNo novel, when out of the blue, Jamie invited me to guest post on his blog. I was honored. I was pleased. I was sure I was going to be able to provide some uplifting, motivational post containing concrete examples of how I had applied myself to WriMo, met my goals, and was enjoying a wonderful, rich, rewarding, and relatively trouble-free experience thanks to my tenacity, and the ever-present wave of unbridled enthusiasm from fellow WriMos across the globe. Oh sure, I’d have some problems, but these would work themselves out as I smiled, furrowed my brow, and kept on keepin’ on. I might get stuck, but it would be the “usual stuck,” nothing overwhelming, because I had “a plan,” or at least an idea.

When Jamie contacted me, it didn’t seem like this was an unrealistic thought. I was in the middle of chugging away on my NaNo novel. I probably had a good 23K under my belt right around the time he contacted me. I was scooting along pretty well, and it seemed a pretty safe bet that I was going to hit my goal of writing 50K by the 20th of the month. Sure the plot was moving a little slowly, but I was fairly certain that any pesky details would work themselves out in the remaining 27K, and I would likely be pretty close to finishing my novel by the time I hit 50K on the 20th. This would, in turn, mean that I wouldn’t have to worry about setting aside much extra time during the Thanksgiving holiday while family was visiting.

It was a very nice thought. It was very good(?) planning. It was also wrong.

Yes, I’d hit fifty thousand words. I had reached my word count goal in my prescribed timeline. I’d even done a little better. Unfortunately, my planned laurel-resting was upset by one crucial detail: The story itself wasn’t anywhere near being finished. In fact, it seemed that, while my novel had begun at Word 1, my story didn’t really get going until somewhere around Word 20,000.

This was bad. This meant that Thanksgiving would not be the carefree affair I had envisioned. I would not blissfully play with my lovable little single-digit relatives while having some pecan pie and wowing the fam with the triumphs and tribulations of “How I Wrote a Novel in Less than Twenty Days.” Instead, what I would be doing in between bites of pie and playing with nieces and nephews was fretting, worrying, and more writing. Being that I like to get a good head start on things, I started in on the fretting and worrying part immediately.

I had thought that 50K would be this grand milestone, having this “I did it!” sort of feel to it. I was actually a lot more excited at 49,006 words. When I hit 50K I kind of went, “Woohoo – oh crap,” realizing that I still had a long way to go and didn’t really know how to get there.

As I collected my thoughts I realized a couple of things:

About two months ago I took part in a local art event in my town during which you were challenged to create a piece of artwork in one day. My “plan” (notice the use of that word again) was that I was going to begin and complete a work of kinetic sculpture within the prescribed period of time. When the day arrived, I showed up with all my stuff, unloaded there on the sidewalk, and went to work. I worked, I hummed, I chatted with passers by, and I kept working. Time was moving quickly, but I was still getting some things done. Suddenly, as if I had only arrived moments ago, people were streaming past me to turn in their completed works. I sat there at my little card table with large loops of copper in my hands resembling nothing more than maybe a loose wire basket. A woman with her daughter came up and asked me what I’d made. “It’s not done,” I said, shoulders slumping. Her daughter looked at me silently, and then walked off. I felt completely defeated and frustrated. I wanted to leave immediately. I wanted to throw out what I had started and forget the whole thing.

The urge to quit was very compelling for about ten minutes, but I fought it. I decided to stick around and look at the other art work, enjoying what others had accomplished, and considering my other options as well as giving myself credit for having done the bit I’d managed to do. I ended up having a really good time, and decided to let go of my previous expectations. Instead of giving up on my incomplete work, I would take it home and work on it until it was finished. It ended up taking quite a while, and there were times when I doubted if I could complete it, but in the end it turned out wonderfully, and I received some very positive comments on what was my first full effort with this type of art. While events didn’t transpire the way I thought they would, they certainly turned out well, and I’m very happy I stuck with the project.

While I was still in the process of completing that sculpture, I attended my first writer’s conference. I went into it with many ideas of extending my world of experience, of learning new things, of feeling inspired and rejuvenated. While there might be some rude awakenings, overall I planned to have a pretty great time. How bad could it be, really?

Toward the end of the conference I took part in a workshop that asked us to write character descriptions in ten-minute increments. We were then encouraged to read these aloud. I started out poorly, and got worse. By the end of the fourth and final exercise, I’d locked up completely, having written only a single sentence which had no descriptive qualities to it whatsoever. I had to tell the instructor in front of the group that I didn’t have anything to read. I felt defeated and frustrated and angry. (Ooh, anger – a new emotion! Well, it was probably there with the art work too, honestly.) I was ready to leave immediately. Why stay? There wasn’t much of the conference left on the schedule, and was I even enough of a writer to bother sticking around? After all, I apparently couldn’t describe what a shoplifting woman in Walmart looked like.

I wanted to leave, but I didn’t. I stuck around, listened to the remaining scheduled speakers, and then went immediately to my local WriMo meeting. It might seem that hanging out with other writers after feeling slain as a writer is a terrible idea, but these are WriMo friends. They’re all about rambling plot lines, flimsy characters, and thinly-veiled attempts at padding a scene enough to reach that magical 25K just before bedtime. In other words, they’re okay with mistakes. Very okay. After hanging out with these people and sharing my experience (“It was awesome, but I totally went down in flames at one point,” I told them.) I didn’t feel terrible anymore. I didn’t feel like I couldn’t write, I just felt like I’d had a bad moment. Now I’m more than 50K deep in WriMo and having a good, if sometimes rocky, time of it.

In both cases I went against my first instinct, which was basically to run and hide from the fear and shame of not living up to my own expectations. The huge payoff for working through those situations was that I proved to myself that I could go through the seemingly seemed impossible, and come out not only alive, but feeling pretty good about myself, with some positive results to boot.

I’m still not sure where my novel is going. I’m still intimidated by the thought of all the writing I have left to do, but I know that if I stick with it, the rewards will definitely be worth it. My past experience – research if you will – has shown that it is hard, it can be painful, but ultimately it can be pretty fantastic. I just need to lay aside the expectations and keep doing the work.

8 thoughts on “On Expectations and Doing the Work: A NaNoWriMo Profile”