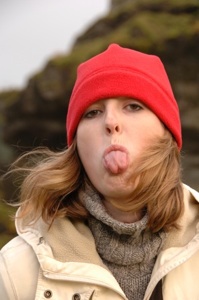 Whitney is a 2nd time NaNoWriMo participant. With nearly two NaNos under her belt she’s decided it is her calling in this life to spread the wonders of month-long noveling to the world – or maybe just Northern Virginia and Maryland. Whitney feels like writing what you know is for the birds! If fiction is for escapism, step outside your comfort zone and explore uncharted territory!

Other than noveling, Whitney can most often be found behind the lens of any number of cameras (a Nikon, a Fed 5, a Pentax K-1000, a Holga, or a Kodak Duaflex IV), haikuing, or running her beautiful Dalmatian, Magnolia, in flyball.

Whitney’s progress can be followed via Embarking on 30 Days of Literary Abandon (apologizes for the hyperlink, it’s an abbreviation for the “old” title to her first NaNovel: 10-90: The Life and Times of an American Bank Robber.)

It happens around 40K, sometimes as early as 30K. You’ve passed that half-way marker. You celebrated at 25K. You are happy to see light at the end of the tunnel. It’s true, NaNoWriMo Stardom is in your future. You are going to make it to the finish line! 50,000 words in 30 agonizing days will be an achievement that you can brag about for years to come!! You are going to be an author.

Wait… what was that? Didn’t you see it? It was just right there! Look!! There it goes again!!! No, I’m not crazy, It’s out there. Suddenly every bump in the night, every heavily cloaked man-who-fits-the-racial-profile-of-a-terrorist-suicide-bomber, every eye-shine in the night on your drive home from a write-in, every whine of your hard drive is a disaster waiting to happen. You are convinced that everything is out to get you.

It’s OK, take two aspirin and Tweet me in the morning.

You have a bad case of the NaNoParaNoia. It’s a condition that strikes WriMos when they least expect it. It’s not mentioned on the forum boards and you won’t find it in No Plot? No Problem! There are several strains of NaNoParaNoia.

Many people experience NaNoParaNoia as a nagging sensation that their computer will suddenly start to phagocytize their NaNovel while they sleep. Common manifestations of the Computer Phagocytosis NaNoParaNoia can be backing up your novel in every known location on the face of the planet including, external hard drives, USB flash drives, various online storage locations, emailing copies to yourself every 20 words, printing hard copies and stashing them all over your house, or actually drafting portions of your novel in permanent ink marker on your dog.

Unlike the previous strain, AgraphobiaAgoraphobia NaNoParaNoia can either be manifested by feeling as though onlookers are attempting to steal your brilliant NaNovel idea for their own or you could experience the aforementioned Terrorist day terrors. You’ll be sitting in your local coffee shop, minding your own business and suddenly you’ll be convinced that the old woman with the large, over-sized carpet handbag is really packing a sawed-off shot gun that’s got your name written all over it because you failed to stop and let her cross at the cross-walk near the grocery store last month and the old broad has been following you around for the last month, tailing you until she found the perfect moment to blow you away. Or, you could start to have a panic attack every time you see anyone resembling a member of Al-Qaeda, thinking that today could be the next time they try to stick it to America by planning to kick us where it hurts; right in our espresso, double shot, tall, no skim, double chocolate Latte loving hearts. Then every guy who walks through the door of the coffee shop wearing a winter coat and who looks like his name could be Ahmad you will believe is the next suicide bomber. After all, if you backed up your novel in every space-saving, internet-loving place known to month-long novelists everywhere it’s not gonna matter if you get blown to smithereens.

This particularly specific strain of NaNoParaNoia is less common than aforementioned two. Deer-hittith-carith NaNoParaNoia affects those WriMos who have to drive long distances to Write-Ins in the dusk hours and find themselves on the constant look out for the seriously over-populated White Tailed Deer who like to stand like a deer-in-headlights on highways all across America plaguing unsuspecting WriMo motorists. Commonly, WriMos who are afflicted with this strain will often load up on extra doses of double shot, no skim, double chocolate lattes thinking that this will help keep them alert for the drive home. The ultimate fear is not that the crash will cause hospitalization, for mere broken bones will not impede one from reaching the finish line even if the laptop was destroyed in the crash (internet backups are a lovely thing). Rather, the fear is that the head trauma sustained could cause a brief comma that would end on December 1st, just hours after the window to verify those last few hundred words has closed.

It is possible that there are other strains of NaNoParaNoia out there. Scientists are discovering new symptoms every year. The most important thing to remember is that this is a very treatable disease. It is temporary and it seems that all patients are completely alleviated of all symptoms once their eyes are fixed on that beautiful purple Winner’s Bar and they are able to post Winner’s Icons to their blogs. Hang in there WriMos, NaNoParaNoia will pass.

[Editor’s note… While preparing your comments, you might want to visit the Phobia List so that you too can be as witty at Whitney. 🙂 ]

7 thoughts on “NaNoParaNoia: A NaNoWriMo Profile”