Even after all these years of writing stories and writing about writing stories (how’s that for keyword density), I still ask myself that question. Lately I feel like I’ve gotten a bit of a handle on it. This doesn’t mean I’ll be able to articulate my thoughts in any helpful way, but that’s never stopped me from trying before so why not give it a go?

Stories begin life in many ways. You may have an idea for a character or perhaps a floating bit of dialogue. You may even have a complete and perfect picture of a series of events that comes in a flash of pure artistic insight (in which case I recommend you keep the origin to yourself lest you receive a beating from those less fortunate).

That said, possession of raw materials is not a story. You can forge a wonderful bit of prose from the portrait of a person or even a sequence of beautiful events, but it isn’t a story. People may read your carefully wrought masterpiece and sigh from the sheer pleasure of your words careening about in their heads, but it isn’t a story… A story needs something more. 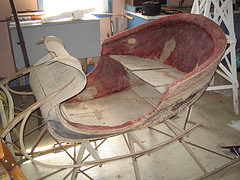 Down at the bottom of this post is a piece called “Albany Cutter”. This piece was inspired by a weekend in the deep country. My wife’s family farm had just gone to auction and sold, and the family was gathering for Easter. My father-in-law had salvaged an old sleigh from the woods near the farm and I was overwhelmed by the sight of this ravaged bit of history in his workshop.

Mixed in with lots of other emotions I probably had some wonderful material for a poem or even one of my little travel narratives. But underneath all of that, I began feeling the stirring of something else, something that did not exist anywhere but in my own mind. I felt like I had a story.

So I set about trying to create a story from this material. I began by writing down everything I knew about the events of the day and then I stitched them into a more palatable sequence for dramatic purposes. After that, I looked under the covers to see what magic could be found.

By “magic”, I mean the things that never happened. All of those characters and actions that never existed anywhere but in my own mind. As I dug there, I found that I had a very dark story emerging and I was afraid of it. I was afraid because I was worried that I would hurt someone’s feelings if I told it as it was being told to me.

Now, let’s think about this for a second. I was worried about something that didn’t exist anywhere but in my own mind. Truly, there is nothing to connect what I was thinking to the real events of that day or the people in my wife’s family. It’s completely made up. And yet, there is that fear. What on earth was I afraid of?

When you feel that fear creeping in, you’re on track to getting the story out of your raw materials.

This doesn’t mean that every story has to be some dreary affair where people are tortured and killed or lots of bad things happen (although it helps). The fear is just a guide, a marker, that indicates the entry-point to the dramatic events that should shape the story. As a writer of stories, you have to dig into this fear and find out what’s itching under the surface.

The reaction from readers of “Albany Cutter” (and editors who rightly rejected it) was fairly universal, “Nice. Nice but… ‘Meh.'” When I look back at this piece and my notes, I see that I was reaching for a large social commentary on the decline of the rural way of life, the farming life. Nothing wrong with that, but it’s just a theme really, not a story. The story is completely untold.

So where is the story? The jumping off point is way down on page 9…

George put the boy into the bucket. How he knew to snap the reins, George couldn’t guess, but he laughed and played along while the boy went like hell across the countryside on a frosty winter’s evening.

But where did they really go in that cutter? George wondered if they raced it across the powdery snow of early morning or under the stars all night. A person couldn’t take a fancy sleigh like that to church. It was only big enough for one person anyway, like something that might have belonged to a doctor.

I wrote up a little section about the real story in my notes and in fact it is the place where I completely froze. I had a picture in my mind of a man, a horrible man who ruled his family like a tyrant. He’d race that sleigh like hell over the froze road, like the devil himself churning sparks in the pitch black night. This man was absolutely brutal. The real story is the murder of this man at the hands of his son who butchered him one night in the snow outside their house.

This is how the cutter came to be forgotten but also how the family could never seem to get rid of it. Only the old man (Henry in the story) knew the real story. Of course, Henry is based on a real man but the events I just mentioned above are completely fabricated – mostly.

Yes, that mostly should make you wonder and I think that’s inherently what makes a story a story. The something that is mostly if not probably true, if not in deed at least in thought. This is what makes you pause before writing or holds you back completely.

You must push through the fear or else you’ll end up with piece after piece like “Albany Cutter.”

4 thoughts on “What Makes a Story?”