“It is in the impartial practice of life, if anywhere, that the promise of perfection for the novelist’s art can be found, rather than in absurd formulas trying to prescribe this or that particular method or technique or conception. Let the novelist mature the strength of their imagination among the things of this earth.” ~ Joseph Conrad 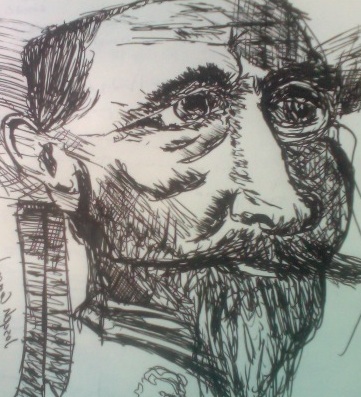 A shoddy sketch of Joseph Conrad.

I’m not really sure I know what all that means, except that maybe I shouldn’t be putting it at the top of a post that has absurd formulas and prescribes techniques and methods for dealing with failed books. Still, if I let the espresso do the talking, I have a sense that Mr. Conrad is saying something about creating fiction from life and not allowing ourselves to define failures by the strictures of others. And if not that, well, at least it reminds me of the shoddy sketch I made of Joseph Conrad in my notebook last year.

My failed books are a favorite pastime of mine. In fact, every 18 months or so I take it upon myself to make a private journal entry where I list all my past failed books and then set about tearing myself to pieces. It’s good fun and it’s probably something that sounds familiar to many of you.

In case you were worried about me going through the list right here, let me put your mind at ease. The list is my own private issue. However, I do have some criteria I’d like to share because not just any bit of scrawl makes it onto my list of failed books.

Criteria for a Failed Book

While I’m all for picking arbitrary boundaries as a means to defining success or failure, I actually have a reason for this number. (Shocking, yes, I know.)

Between 7,500 and 10,000, a bit of developing fiction might still have hope of becoming a story. Yet, once I get beyond the 10K mark I find that I just have too many threads going to hope for getting away from the tale. Clearly, if I can do what’s necessary to produce 10K, the thing is really gnawing at me.

2. A deep sense of dread about never being free of the story or fear about having a story too big for my talents.

Believe it or not, I’ve written stories I’ve completely forgotten about. Right now, I can open up the folder where I keep all my stories and find a wonderful trove of surprises. That’s what short stories tend to be for me. Little interludes. Intense interludes, mind you, but interludes nonetheless. I write them and then I pass on by.

Books are different. They usually start as stories (although I’ve had two that began with a full flash of the entire thing laid out end to end) and as I uncover the details and begin to allow the characters to take hold, they just keep expanding. I have no idea where all of this comes from, but this is how a story becomes a book in my eyes.

The sense of dread enters when I realize that I’ve got a big fish on the line. I see that I’ve blundered into something important, a bit of life that feels so real that I feel bad for the characters for having such a poor vessel as myself to bring their tale to light. Rather than butcher the thing, I bail. But it’s too late to bail. The proverbial big fish that got away is already at the surface and I’ll never forget it. This is one reason I can’t watch melodramas on television. Once I see what’s coming, I feel all nervous and I don’t want to see what happens next even though I know exactly what’s coming.

3. I have more notes than story.

I like to write out my thoughts about a story. It helps me work through the details. If you read these notes, it would be no different than sitting down across from me at the cafe and hearing me go on and on. The only difference is that the notes are actually cogent.

So when a book takes hold, I tend to work out about a thousand different angles. I write about the characters and the places. I write about potential plots, scenes, bit of poetry I’d like to work in, the grand themes. It all sounds great but of course these are just notes.

In my last post I mentioned the book called Revisions. The text of that book is about 70,000 words. The notes are well over 150,000. I have another fragment that is about 30,000 words but again the notes crack the century mark.

P.G. Wodehouse went about writing books in a similar fashion. He’s write about 150,000 words and then he’d get on with the tale. At least, this is what I read in his book on writing.

What to do about Failed Books?

It would be a little silly of me to talk about the right course of action for dealing with failed books. After all, I have half a dozen that fit the criteria above along with two others that are actually “complete” and yet have not been published. Still, here are a few things I know:

1. Understand that your book isn’t as bad as you think it is.

This doesn’t mean that it isn’t a bad book, but I seriously doubt that it’s so bad that a mob of literati are going to appear on your doorstep and demand that you give up your typewriter so that they can destroy it in the town square. No, I assure you that your book isn’t that bad.

If you keep thinking your book is bad, you will abandon it just like I have done with each and every one of mine. Your book will sit in your drawer unfinished, just like all of mine. And if that doesn’t sound like the enough fun, you will find yourself haunted by those books for the rest of your life (or at least for a brief period every 18 months like me).

2. Get a second opinion.

Who reads your books? Your mom, your spouse, your best friends?

You need to get a second opinion from another writer, preferably one who has actually published a book or two or ten. While finding that person may not be the easiest task, it isn’t climbing Mount Everest either, unless the people you seek are wildly popular or dead writers of immortal literary stature.

Right now I’m reading Wallace Stegner’s On Teaching and Writing Fiction. I like what I’m reading but Mr. Stegner is not available to give me a second opinion on my books. Mr. Stegner is dead and has been for a long time. Another option is Philip Roth, but for some reason he isn’t returning my phone calls.

3. Get over yourself or at least get out of the way.

A friend over on LiveJournal put up a link to my last post and then went on to talk about her problems (which are different than mine). She talked about getting over herself so that she could move on with writing what needed to be written. I like that idea though I usually see it as getting out of my own way.

I’ve talked about both angles many times here and if you reread that section about making more notes than fiction above you’ll see that I tend to get in my own way quite a bit. I figure that I won’t ever get away from making notes about my work, but what I can do is realize that I’m only hurting my chances of finishing the book if I stay in that world too long. That outcome has to become unacceptable – I have to get out of my own way.

In keeping with my new habit of sharing actual writing, I’ve attached a chapter from a book called Syntax. (I know, I know…. What’s with these one word titles?)

Syntax is a book based roughly (and I mean very roughly) on the time I spent in Switzerland some years ago. I actually started writing this book before I took up the character of Burt Thompson in Revisions. I ended up bailing from Syntax for the reasons stated in #2 above: I saw the whole story in front of me and I became afraid of writing it.

The book meets the minimum requirements as defined above. I have about 20K words along with 80 or 90K of notes. And of course, I’ve never forgotten the story. In fact, I recently wrote out 15 long hand pages about the story.

The chapter is about 20 pages (~5900 words), and this time I’ve even figured out how to spell “chapter” correctly in the filename. Hooray for me!

10 thoughts on “Moving on from Failed Books”