“The prevalent fear of poverty among the educated classes is the worst moral disease from which our civilization suffers.” ~ William James

Like many county seats in Ohio, Lancaster was once a vibrant agricultural center. A town with money. This source of revenue dried up in the late 1920s in the run up to the Great Depression, but in Lancaster’s case the effects were somewhat dampened by blue collar factory jobs which carried the town up through the early 70s. Since then, there has been a steady if not sharp decline in the prospects of those living in Lancaster and similar communities across Ohio.

Rural poverty is something few people from the city can hope to understand. It isn’t that city life is so very different, but rather that we are often at such a far remove that it is easier to make assumptions.

Distance also plays an important role in art. As writers, the further we are removed from a situation, the less likely we are to capture the truth. However, the closer we are the more likely we are to skew our impressions in the opposite direction.

In the case of rural poverty, it is easy for a metropolitan mind to picture people with no hope and no resources. People struggling without any sense of where they are going. While those immersed in the day-to-day of rural poverty know it is far more complicated. They know that poverty inspires a fierce sense of pride in the possessions that cannot be stripped away by financial hardship, namely pride in family and place. Such is the intensity of this pride, that a writer might be swept up in a wave of sentimentalism and fail to provide context that helps explain the reality.

Writing about subjects where your personal emotions are intense requires time to consider the wider picture and time for revision to add balance. This is nowhere more apparent than in John Steinbeck’s Grapes of Wrath, which in my opinion is so unbalanced that it weakens the central theme of the story. A writer cannot have all evil centralized in one class of character without creating a great sense of false good in the other.

My family comes from southeast Ohio and West Virginia, so I know a little something about rural poverty. At the same time, I live (and have always lived) in a very affluent suburb of Columbus. And so, I’m going to write a little about a recent personal experience to illustrate just how easy it is to fail from both sides of the equation. 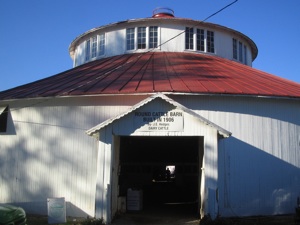 This past weekend, I took my family to the Fairfield County Fair in Lancaster, Ohio. This was the 158th anniversary of the Fair, and since my family is from Lancaster it was a fixture in my childhood, the bridge between Indian Summer and true Autumn. But it had been a long time since I’d gone to the Fair, primarily because going to the Fair meant paying a visit to my grandmother.

My grandmother suffered a stroke many years ago and spent her declining years in assisted living and ultimately in an institutional nursing home. Over time, a few missed visits became a barrier in itself which only widened in time. Birthdays missed. Cards not sent. Pictures of great-grandchildren not sent. It was all reduced to a state of inevitability where I knew that the time of death was near and it was simple to rationalize my absence by saying things like “well, she didn’t really know who I was anymore” or just “what is the point of that at this stage.”

As a reader, you may be wishing for something here which will lift your spirit, but I do not have a tidy ending. I did not have an experience where I went to visit my grandmother in the nursing home and she recognized me. Or even a moment where I gained some sense of closure for myself… You see, my grandmother passed away two weeks before and it was planned that we would have a family gather at the cemetery before going to the Fair.

Maple Grove Cemetery is a short way out of town. It’s a rural cemetery, though not a terribly old one. There are mature trees and a sense of quiet. Yet, it also feels as if things haven’t quite settled, though I suppose that has more to do with the way the cemetery sits beside the road leaving you feeling exposed to the traffic.

The gathering was small. My grandmother was 98 when she died, and she always said that she did not want a service. “Save the money!” And so that is what her three sons did. They saved money by having her ashes buried during the week so that they didn’t pay $200 for weekend overtime. There was no pastor, either.

She was buried next to my grandfather. He died in 1950, leaving her to raise three boys on her own. Seeing his name on the stone, I realized that I had never been here before. I also realized that I’d probably embarrassed my father when I went to the wrong cemetery (one in town) and called him to find out where we were supposed to go.

When I was a child, we would travel down for the Fair. I remembered the rides and the midway, but most of all I remembered the food. My grandmother loved the powdered waffles, and they had to come from the place under the grandstand that had been there since 1912.

At the gravesite, my family was milling around, talking and catching up. My father had placed a powdered waffle on the bouquet of flowers that covered the grave and everyone thought that was fitting. Everyone talked about going to the Fair as planned, that we might all go together like we did so long ago when my father and his brothers were the same age as my cousins and I were now. But those days are gone. There have been divorces and deaths. New wives and husbands replaced the departed. New children had replaced us, but unlike my cousins these new children were all strangers to one another.

We all left the cemetery individually and traveled into town.

In many ways, Lancaster had grown. There were more stores and more people, but the stores were further out from town located by the newer housing developments. The inner core of old homes had deteriorated and there was a density to the decline here because there were just so many people living in it. Still, while there are some things in Lancaster that were universally upsetting, the truth is that I saw more pain because I had other memories to compare them with and I had my own personal shame to contend with as well. 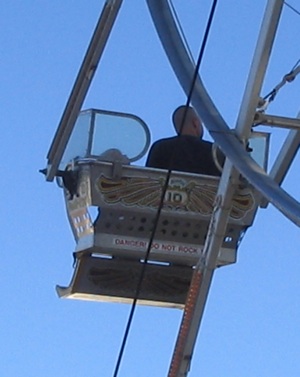 My boys were happy to go to the Fair, probably as happy as I had been. We walked together through the crowds. The boys called out to play the midway games and we ate powdered waffles from the place under the grandstand.

We had lemonade and cotton candy. We walked through the round cattle barn. Then, we went to ride the ferris wheel.

On the wheel, I sat with my youngest boy. He was so excited until we got going and then he was terrified with every turn. That feeling of falling backwards was too much for him, and no matter how I tried to distract him by pointing out the hills I knew or the places in town I knew he would not be consoled.

When we got off, we ran into some of my cousins. We talked for awhile, but by now the sun was setting and we needed to leave.

The traffic around the fairgrounds is crawled so I couldn’t help but notice the Fairfield Inn, a little beer joint across from the Fair, was still open. I remembered driving by that place when I was child and the sun was setting at the end of Fair Avenue. I remember seeing the tiny, red neon letters B E E R, and when we drove past I got a glimpse of the same figures seated at the bar. It made me wonder just how much, if anything, had changed.

Driving home was quicker than I expected, even though the road was more crowded. I may be wrong about a great many things concerning my memories of Lancaster, but one thing I know for certain is that the road between Columbus and Lancaster has always gotten wider and the traffic heavier.

I wrote this post in support of Blog Action Day.

9 thoughts on “The Poverty of Distance”