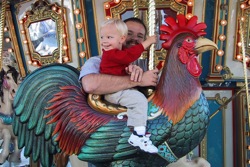 The picture to the right is several years old – you can tell because I have more hair. I included this picture because I feel like I’m riding on a carousel and I don’t want to get off…

Did I accomplish anything? Maybe. I built the shell of a blog for my wife (not live yet). I wrote a few posts for this site. I read a few books. I had a great time with my kids building lego models, making movies, and playing games.

But yesterday, I sat down in the cafe and started to write a story. It began with a line my wife tossed out in the car a few days ago:

She was a bad word.

It’s a cute sentence, I think, and it led to a noir scene that was fun to play around with. Yet, while I worked at the scene, something else happened… I started writing.

I was riding the rooster.

Now this may sound strange to you since I post here every few days and if you’ve been following along you probably know that I write every single day. However, there’s a big difference between writing and writing. Where you’re writing, the story reveals itself quickly and neatly. Details emerge and knit themselves together like some supernatural creature coming to life from the very dust beneath your unswept cupboards.

That’s what happened to me yesterday. I was just playing about with this noir exercise and a different story started to emerge, a story centered on a character I developed a long time ago. This character was supposed to fit into a horror story involving Harry Houdini and H.P. Lovecraft. That story never really got off the ground, but the basic outline of this secondary character kept hanging around. Nagged me.

I finished up my work at the cafe and went home. The story kept poking at me, so I pulled out my journal and started making notes. Soon enough, I was writing dialogue and continuing the general narrative. I kept pushing into the details and they kept unfolding.

Later, my wife and I took the kids to the library. While I wandered about looking for Nordic mysteries (I’m on a kick right now), I kept thinking about the story. I moved up and down the stream of time around this character. I threw out all the noir I’d added before and began to uncover the real life of this character.

Thinking back now, I must have looked like a loon walking around the library in daze. 😉

I haven’t finished the story yet and I’m frankly getting a bit worried. You see, yesterday was the last day and now it’s time to get back to the regular priorities of life.

Does this sound familiar to you? Have you experienced a similar shift of consciousness only to find yourself turning away because the time is up?

That’s where I am now. The carousel is slowing down. The music is coming to an end. Other are waiting in line, waiting for my time, but I just want to keep on riding.

[By the way, no offense to lovers of noir. I love it myself. I’m just really bad at writing it – along with most highly stylistic forms. If I go there, it has to be comedy because the whole thing gets so exaggerated that it turns funny whether I want it to or not.]

4 thoughts on “Riding the Rooster”