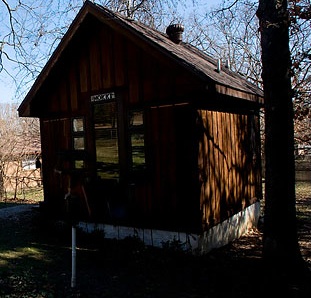 I have a little studio office where I practice my writing hobby. It’s a sweet little place. After the jump, there’s a little essay I wrote about my street. In any case, this article in the NYTimes reminded me of another dream: to have a writing cottage in my backyard. Now I have a new word to go with my dream – mokki!

Each morning, I arrive here the in the studio and put my things in order. I select a paper (the TLS, the LRB, or maybe something else – a volume of Proust or a slim Coetzee or Kundera). I walk down the dark halls and then go down onto the avenue where cars sometimes are queued for the light. I see the people sitting there, drinking coffee, listening to their news radio, talking on the phone, or staring blankly into space.

I breathe the air.

On mornings like today, it smells of spring though it is too cold to call it such. I throw back my shoulders and walk this line of buildings, this strip of memories.

For most people, it’s a rare occasion to experience that perfect morning stroll. I’m fortunate in the abundance of such moments provided by the little stretch between my studio and the cafe. It’s a quaint neighborhood. Old in the sense that it has been here for more than one hundred years, which on the Frontier is ancient though elsewhere it might just be an upstart.

This street isn’t noisy or crowded like Telegraph in Berkeley or one of a dozen such streets in New York. It isn’t quiet either, like the back alley shops of the Niederdorf in Zürich. This avenue is casual, a blend of commercial and residential, the heart of a small suburban community founded at the end of the nineteenth century but built up in the 1920’s and 30’s.

First, there is the blue house and the white house, whose occupants are very old. When they are gone, these houses will no longer be lived in. They might become offices for a doctor, like the dentist across the street, or maybe we will move in there, or perhaps someone will tear them down and make room for parking. These are the last people who will ever live in these houses. I wonder if they realize that.

There’s still an old movie theater here, an art house flanked by a small gallery and a 500 foot square bookshop (now gone). A dance studio camps on the edge of an alley. On weekend nights, you can watch a dozen couples step through the timeless graces of ballroom styles. If you’re early enough during the week, you might be able to see housewives getting their tango lessons in, but the lights are never on inside at that time so you have to look closely.

Thinking of the dance studio, I’m reminded that our own studio is camped squarely in the middle of a large building that used to be a dance hall. If I stand on my desk and push aside the tiles of the drop ceiling, I note that the true height of the ceiling is nearly ten feet further up. It’s an old building, converted to offices perhaps thirty or forty years ago. I wonder what memories still remain of the days when this was the place to be and the movie theater down the street was new.

Beyond the dance studio lies the rest of the shops: the cafe we frequent, the hairstylist who takes her cue from the Rolling Stones, the eclectic ice cream shop serving flavors like raspberry-buttermilk, the spa-cuisine restaurant whose bleary-eyed chef is an icon in the neighborhood.

A new condo building has gone up on the corner. There used to be a service station there, an old brick building maybe built around 1910. It’s gone now. A shame they couldn’t preserve it in some way. This new building is five stories high and they’ve been building it for almost two years. It’s fantastic to look at, bricked and styled as it is, but it obscures the view of the elder apartment house to the west though I suppose this is the point.

It’s still too cold to call it spring. This morning, I walked along the avenue, the moon clinging to the edge of the sunrise in the clear blue sky. Three birds sailed though the frictionless void. They cut over the traffic, gliding past the trees on the street one over and then disappearing into the arctic remnant air that will soon be forgotten by us all.