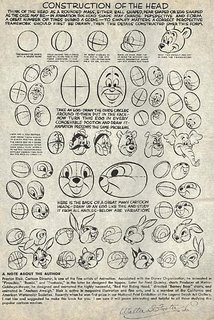 The egg thing was part of a little program I created for myself to reconnect with an old interest in visual arts. It was also a great way to dodge any serious writing for awhile, so all the more fun.

It all started with a story that I thought would be better-suited to being a graphic novel, at least that’s what I thought. So, I began by hunting around for some information about the art. I read any number of books and even attended a lecture by Scott McCloud (awesome). However, like writing, you eventually need to your butt into the chair and do some scratching on paper.

JohnK (Ren and Stimpy) has a series of posts about learning how to cartoon, so I jumped on board and started drawing eggs.

Drawing the eggs over and over again until they were “perfect” was difficult, but I understood the value. While practicing, I saw the exercise as a reflection of what helps a writer improve in the art. First, I was copying a master’s hand (Preston Blair). Second, I was learning how to eliminate my own mind from getting in the way of execution.

I carried these lessons forward into further drawing books, copying pictures from Goya and Rembrandt though with far less success than I had drawing eggs. Still, what I began to see was the process of revision and editing playing out between the lines I drew and ultimately had to redraw over and over again until they were just right. I also began to see that my hand learned how to draw certain lines and that when I doodled on my own the pictures became more distinct and unique, less cumbersome and forced.

My own drawings are really quite different from anything I practiced. They look more like the joyful randomness in a semi-schooled hand that is allowed to play. And that makes me happy.

So while the practice-practice-practice method will surely hone your skills, the thing you’re really going for is to learn how the whole thing works as one. When you get deep into the practice of writing, you begin to see that good stories naturally work themselves into certain patterns. You can encourage that pattern and create a richer experience for the reader as a result.

Robert Campbell is one of the contributors in the Writing Mysteries book I’m reading right now. His essay describes his technique for outlining. It’s a bit dry for my taste. He talks about the kinds of files he stores in his word processor (remember this is 1992) and that’s all well and good, but what I really sat up for was his discussion of learning how to paint way at the end of the essay.

Before I became a writer I was a painter. When in art school, we were told to go to museums and paint reproductions of the old and new masters.

It was astonishing how much could be learned in the process. In learning how to achieve results similar to those in those skillful paintings, the student learned how color worked. We learned how to achieve certain textures. We saw that shadows contain the complement of the sources of light. But most of all, I think, we learned the conversation of painting, the interaction of one corner of the canvas with another, the far distance with the near distance, this color and value and texture against the others.

I love this idea of conversation of painting because it translates so well to the foundations of writing. Yes, I realize that a story is a conversation with an unknown reader, but I’m talking about the mechanics of the work itself. How one paragraph speaks to another, how themes blend with one another, how repetition and rhetorical devices assist in weaving a substantial fabric of fiction.

And it all starts with drawing a few eggs.

So, did I ever finish working on that graphic novel? No, not really. I’m talented in drawing the way some people are really good at cooking at home but have no intention of ever opening a restaurant. I’ll keep at it of course because it’s fun, but in the end I’m really just a writer.