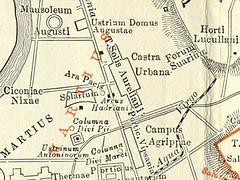 There’s nothing like a good map to spice up a tale.

Maps speak to potentials. They give names and places, structure, to the flow of characters and events. They also lend the weight of untold history to a tale. As characters traverse the stage of current events, some other characters have surely passed that way before. Their passing may have had no impact whatsoever on the story and yet it can be intriguing to dive deep into that history, especially if it is in the real world and we happen to be there.

I’ve had this experience in many places. For example, in Zürich, there is a place where you can see an excavation of roman baths beneath a toy store. It’s down an alley near the Fraumunster church with the Marc Chagall stain-glass windows. Going past this place, you might not think much about the alley and why it’s lit up in the middle of the night. However, if you go down there, you will see something two-thousand years old, a place where people gathered on the same ground you are passing at that moment.

Suddenly the weight of all that time comes to bear.

I felt the weight of time in the mountains near Elm. This is the place where the Russian General Alexander Vasilyevich Suvorov pushed his forces across the Alps during the winter of 1799. General Suvorov was the first to dare such a feat since Hannibal. And when the Russians arrived in Milan, they defeated the utterly shocked and surprised French forces.

Now to stand there in the same mountains and have someone draw you a map of the valley with their words, to explain where Milan is in relationship to your current position, places a weigh up you. It involves you in the story though you are nowhere close to being involved. Yet, the location doesn’t have to be so exotic. I’ve felt the same weight of history and passing in my own neighborhood.

The old stone house at the bottom of the hill near my house is one example. When I wrote this piece, the house was only a small part of what attracted me to the story. The old maps of the region I found when I began to do my research on the building are what really drew me in.

By tracing the maps, I learned who lived where and when they died and where there are buried. Then, once I knew the places, I began to feel the stories. I could see people passing beside the river at night. I could see stories unfold in the shadows… In addition, I knew that I had passed by those very same places many times and that my own story was intertwined by space with those who had come before and who would come after.

If you’re stuck trying to add depth or layers to your story, try drawing a map. Think about the places once named and now forgotten. Now, give them names and histories. Let you mind wander over the paths. You may never share this with anyone, but I hope you do.

What maps do you draw when you begin to tell a story? Do you draw regional maps or architectural plans? Or do you simply have a character who gives you the lay of the land?

5 thoughts on “Maps and Fiction”