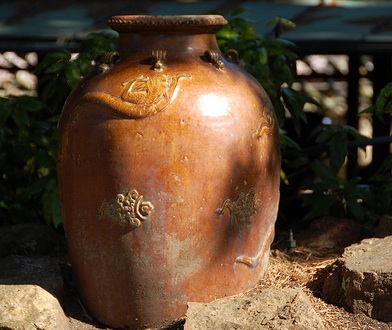 Every writer has tricks.

Tricks to write and tricks not to write. It’s a bit of cruel fate, but most writers are far better at the latter.

If you look back through my archives, you’ll find that one of my tricks has been to crank myself up into a terrible rage. To burn off the block that’s holding me back. It always seems to get things moving. I suppose it does in a way, but I don’t think it’s very healthy. I don’t think it makes me a better writer, but sometimes it’s necessary.

Another trick is splitting myself in two or even three. Tackling as many projects as I can.

I think this is when you really start to write — or maybe you become a monk or float off on a cloud. I’m still not quite sure yet (though I feel a little lighter than usual).

Speaking of monks and tricks, here is a little story I heard once.

Each day, the monastery tasked three young monks with bringing up water from the valley. The monks used large, clay jugs to carry the water. The jugs were tied to either end of a fat pole, which made it easier to balance the weight on their shoulders.

This is the way the water had come from the valley as long as anyone could remember. And no monk, no matter how fast or how strong, had ever brought more than four jugs of water to the monastery in one day.

Yet no one could quite recall three young monks like Dai, Taku, and Kisho.

Taku came from a village in the valley where the land was flat. The runners in Taku’s village were well known for their speed. Dai came from a mountain village near the monastery where it was said that even children could lift rocks twice their size. As for Kisho, no one knew where he came from. He simply arrived one day at the monastery and never said a word.

On the day before these three young monks were set to the task of carrying water, the Abbot of the monastery came and reminded them of the work ahead. Both Taku and Dai had thoughts that they might be the first to bring back more than four jugs of water in one day.

“I have a plan,” said Taku. “As you all know, I’m very fast. In fact, I’m so fast, that it will be no problem for me to make six trips down to the valley before the sun sets. I doubt I’ll even get winded.”

Dai reached over and gave Taku’s arm a squeeze. Taku grimaced in the grip of the big monk’s strong hand.

“How will you carry the water with those arms?” Dai laughed. “Look, I grew up hauling rocks in these mountains. I’ll have no problem hauling up six… No, eight jugs of water! You’ll see.”

Kisho, whose task for the day was sweeping the courtyard, said nothing as always. He merely stopped for a moment to look at the two young monks and then went back to his work. Dai and Taku continued their banter and those who heard them felt sure that the next day would be special.

Just before sunrise, two monks stood at the gates of the monastery. Taku held a single jug in his hands, while Dai had two of the long poles balanced on his shoulders both with two pots tied to each end. Kisho arrived a moment later, yawning a bit as he was never good at being an early riser. He set his long pole on the ground and carefully secured his two jugs while the other two monks continued their banter.

“I bet I’ll have three jugs done before you even reach the valley,” Taku said to Dai.

Dai’s laughter rattled his jugs, “And I’ll just swoop in and fill all eight of these in one go.”

Kisho finished just as the sun peeked over the horizon, but before he could lift the pole, Taku was already flying between the trees and out of sight. Dai lumbered after the speedy valley monk, huffing and swinging his empty jugs. Kisho followed along calmly, passing through the gate and into the beautiful morning.

It wasn’t long before Kisho caught up with Dai. Even though the larger monk was trying to move quickly between the trees his poles kept getting tangled and he’d have to stop and get himself organized again. Kisho moved between the trees and soon even the sound of Dai’s shouting and grumbling was lost behind him.

When Kisho was halfway down the mountain, he saw a blur in the trees below. Taku had the biggest smile on his face as he raced past. Kisho stopped and watched the valley monk zip between the trees like the wind before a storm.

By the time Kisho reached the river, it was hot. He found the spot where the monks were supposed to fill their jugs and took a moment to scoop some of the water from the river onto his head. It felt cool and refreshing.

Kisho filled his jugs and tied them to the pole. Taku came sprinting out of the trees, but this time he was not happy. He came to the spot where the monks were supposed to fill their jugs and skidded to a stop.

“I tripped!” Taku shouted. “Can you believe it? It wasn’t long after I saw you that I came across Dai struggling with his ridiculous poles. I started laughing so hard that I didn’t see a stump right in front of me. Thankfully the jug didn’t break.”

Kisho did not reply. He lifted his pole and started back up the mountain. Seconds later, Taku sprinted past him and up into the trees.

Somehow, as he came up the mountain, Kisho missed Dai. He saw a place where someone had broken one of the clay jugs, but he didn’t see or hear Dai at all. He did pass Taku, or rather the valley monk passed him going back down to the river.

At the monastery, a crowd gathered around Kisho. They asked him where Dai was, but Kisho said nothing. He set down his jugs and began fastening an empty pair to his pole. As he was heading off, Taku arrived with his second jug. A cheer went up from the monks. Taku set off again and passed Kisho before they reached the trees.

When he was nearly at the river, Kisho heard the sound of clanking clay jugs. Dai came following the sound. Kisho noticed that the mountain monk was sweating in the heat and that he had broken a second jug.

The two monks walked along together to the river. They found Taku was relaxing under a tree near the spot where the monks were supposed to fill their jugs.

“I only count six jugs, Dai. Did you get hungry and eat the other two? I can’t imagine that would be good for your teeth.”

“Very funny, Taku. Did you manage to get any water up the mountain or have you spent the rest morning here staring at your reflection in the water?”

“As a matter of fact, I’ve already taken two jugs up. I saw Kisho there. He can tell you.”

The two monks looked at Kisho, who was cooling his head off again in the river.

“I don’t need to make four. I’m pretty sure you’ll just get lost again. So I just need to make three trips, which is no problem.”

At which point, Taku stood up and started out again while Dai joined Kisho in the river.

“I don’t know how I got lost. I guess it was all that turning around when the poles hit the trees.”

Kisho filled his jugs and secured them to the pole, while Dai began filling his six remaining jugs. Kisho waited for the mountain monk to finish and then they began walking together.

By mid-afternoon, they reached the halfway point but it was slow going. Dai had no problem carrying the jugs, but again he had trouble maneuvering between the trees. More than once, his jugs slammed together and the water sloshed up over the top.

A little further up, they found Taku sitting on a stump. He was holding his leg.

The jug had shattered on a flat rock and that part of the jug must have bounced back and cut Taku’s leg. The cut wasn’t deep, but it was bleeding. Kisho set down his water and tended to Taku’s wound. Dai put down his load and stretched out on the ground.

“I dropped the jug,” Taku said. “With this cut, there’s no way I’ll be able to make it back to the monastery and back down again even twice let alone three times.”

“That extra hike really took a lot out of me,” Dai said. “I don’t think I can carry all six of these jugs back up the mountain. I’m so tired.”

When Kisho was done wrapping up Taku’s leg, he went over to Dai’s jugs. He retied the load so that two jugs were attached to one pole and four jugs to the other. Then Kisho went to his own pole, took it up on his shoulder, and started for the monastery.

Taku and Dai watched the silent monk move up through the trees. They realized they had just enough time left to follow along before they lost sight of him.

And even now, no monk has ever carried more than four jugs up the mountain in one day…

9 thoughts on “Four Jugs and a Writer's Tricks”