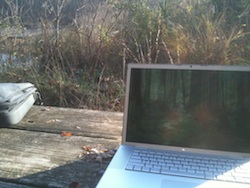 This afternoon, I wrote by a pond.

This pond is sort of hidden on a trail down in the space between the spaces. A big office building is on one hill and several apartment complexes crowd the others. There’s an old picnic table here beneath some holly trees. It was a bit cool to sit in the shade, but fine out in the sun.

On my way to the pond, I was thinking about books I’ve enjoyed reading slowly.

It took me six months to read East of Eden. My wife gave me the book in hopes that we could talk about it, but by the time I’d finished it she’d forgotten some of the parts she wanted to talk about. Right now I’m reading Mark Helprin’s Winter’s Tale. This is another book I’ll spend six months reading. Hopefully, the friend who gave it to me will still remember the parts he liked when I finish.

We take our time reading these books because the prose is so luscious, the story so far reaching, that we can’t help but linger over the passages. We can’t resist reading them again and again. You can jump in just about anywhere and find yourself immersed in the story, drowning in the delightful words the author has so lovingly crafted.

I did not go to the pond to write my slow book. I am writing a different book and I need to make more words appear. I need to push them out and get rid of them.

I heard some movement in trees behind me, and a man appeared. He was disheveled and large. He hadn’t shaved. He was wearing a dirty t-shirt stretched over his belly. His sweatpants had holes in each leg. Booze had eaten away his youth and left a saggy nose in its place.

Using a cold, metal cane, he poked around in the leaves, not really paying attention.

He said nothing else, and I kept working away at my computer while the man rustled the leaves behind me. Eventually, he was going to be off and I told him to have fun.

“Well, that’s the point, isn’t it? Having fun?” he asked, then he pushed into the brush, ignoring the path.

Having fun is important. Sometimes, a phrase or an idea will come out of nowhere. For some strange reason, you know right where it fits. You feel bad because these words might have come to it sooner if you’d been more diligent. You wonder what bits you’re leaving behind.

But you can’t worry too much about these things. You should work, yes, but the real words will come when they are good and ready. The work you do until that point just prepares the way.

When the air turned cooler, I realized I’d have to leave soon, but I wasn’t ready. It felt like I’d been there for a minute, but it was really two hours. I needed more words to come. The words come because I’ve trained my hands to type regardless of what I want to be writing… I wanted to be writing my slow book.

Writing a slow book is a little like deep sea fishing. You get a hit and you’re excited because you know you’ve got something big on the line. You work at it and then maybe you get a little frustrated because it’s not going like you planned or hoped.

Eventually, you sense something even bigger than the struggle between you and the prey. You see you are merely part of a larger set of events and you settle into a different sort of rhythm. In the end, whether you land the fish or not, you are exhausted and humbled. You may also find yourself feeling triumphant or broken.

Yes, The Old Man and The Sea is another of those books I’ve spent a lot of time with. There are others too. Maybe you have some of your own you’d like to share?

The pond is full of mallard ducks. They were silent for a long time, but when the light began to fail they all decided that it was the hour of quacking.

I had to leave but when I had gone a little way down the trail, I come across two elderly ladies. One was wearing a deep purple dress, the other beige hunting jacket. They smiled and said hello.

After I passed I heard the lady in purple say in a hushed voice, “You know I never come this way alone anymore.”

And I realized that maybe I needed a shave. 🙂