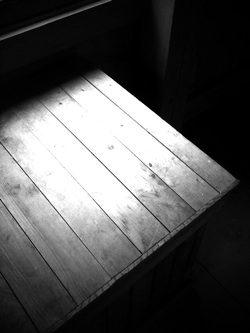 For many, the making of the writer is a bloody affair. It consists of trying and failing, trying and succeeding only to find one’s self blocked by the promise of a breakthrough, trying once more…

Where does this drive come from? What makes the writer who has failed sit down and try once more?

I don’t claim to know the answer. I’m just a fellow sufferer of the disease.

Damn this writer’s heart. Damn it for making me feel…

Yet, if we knew the answer, would it matter? Would it some how solve the problem? Would it help us to make sense of what it means to posses all these words which are so desperate to make the page?

I doubt it. It seems unlikely that knowing would dampen the drive. In fact, knowing the answer would probably make the suffering all that more acute.

My first experience with the writer’s heart came when I was just 10 years old. I bought a typewriter at a garage sale. It was an old Royal office model, a hulking bit of metal that hardly functioned.

I lugged this old typewriter back to my house and set it up on the desk in my room. The excitement I felt at the promise of this machine was intense, and really no different than I feel now when I approach the keys. After staring at the thing for awhile, I sat down and began to type.

The first thing I wrote was a love letter. This shouldn’t be a surprise since I’m such a sap (and proud of it). I have a romantic soul. I find beauty in the most mundane objects and I fall in love every day with some odd thing or another. It might be a cloud or a tree. It might be a book or an ancient motorcycle. It might be the sea. And of course, there is my wife… I fall in love with her each day no matter what happens.

This love letter though was the first. I wrote it without concern for style. It was direct and simple. Can I recall the words? Hardly. Though I know that I signed it anonymously and I begged that if this girl knew who I was that she wouldn’t tell anyone.

Of course, when I sent out the letter, I received no reply. I received no acknowledgement of receipt at school. I heard nothing at all and was left to wonder whether or not the girl received the letter at all. I still wonder and I’ve thought about asking her because I still run into her now and again.

This is the pattern of course. We write. We struggle. We send out our hearts and souls, and then perhaps, we hear a reply.

Damn these words that demand their place in the world. Damn this writer’s heart for giving them life while tearing mine apart.

This sentiment is probably familiar to many of you. You wonder why it is that in spite of the pain you continue on. You wonder why it is that at well-past midnight you are awake and staring at the screen or scribbling furiously in a notebook. Sometimes, you wish it would just go away, that you could be like everyone else, although more often it’s those around you who are apt to ask that question.

The answer I have for you is that you are writers. You are possessed by the writer’s heart, and there is nothing for you but the damnation of the page. Embrace it.

Now get back to work! There are love letters to be written!

16 thoughts on “Damn This Writer's Heart”