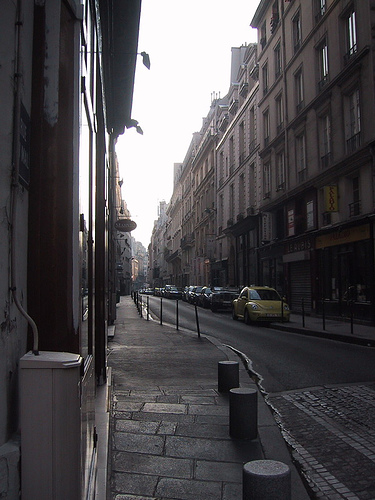 We take the night train from Zürich to Paris. We arrive at dawn. It is Sunday. The city is silent.

This is the final day of the Tour de France. I had a choice between hiking in the Alps, going to Sicily to watch a Mt. Etna erupt, or coming to Paris for the day. I chose Paris.

We walk through the streets in the general direction of the Seine. A young man approaches us on the street.

He walks away a bit confused.

About half a block later my companion asks, “What did he say?”

Behind the church of L’église Saint-Eustache is the Forum des Halles. We hear men singing there but we do not approach. It’s only seven thirty. We assume they are drunk, but there’s no basis for this other than the fact that their singing sounds a bit rough and it is seven-thirty on a Sunday morning. 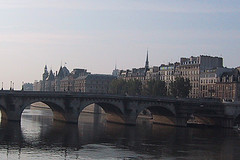 We walk along the east side of the Louvre down to the Seine. I could spend a year with this view and never exhaust the possibilities.

Slowly, the world wakes up.

In the courtyard of the Louvre there are two Dutch cycling fans. They wave hello to us and disappear in the direction of the Rue de Rivoli.

People come and sit by the fountain in the Tuileries Garden. They read the newspaper. We look for food and further up find on the Champs-Élysées we find Paul’s.

Paul’s is a wonderful bakery filled with good smells. The lights cast a golden glow over everything and everyone. As I do in places where I do not know the language, I listen to others ordering, the cadence of their speech and then I do exactly the same. I end up with two croissants.

“I thought you didn’t know French?”

While we wait for the race to start, my companion decides to go up to the Arc de Triomphe. Now, why I am not going along is a bit of a mystery but I decide instead to go along to the other side of the street, which is now filling in with race watchers and take a seat at a cafe. I order an espresso and wait. The Moulin Rouge soundtrack is blasting from somewhere down the street.

The race is much longer than I expected. At first, it was exciting but then by the twentieth lap it’s a bit dull and it’s getting hot. We hang around until the end though.

The Metro is sweltering. I love it. I’m sad though because we’re only going a few stops down the line. I’d like to ride longer.

We are sitting in the Centre Georges Pompidou outside the museum of modern art. We are enjoying a beer. We’ve been joined by a friend of my companion and his roommate.

The two friends catch up while the roommate and I try to hold up our end of the table. While he seems terribly literate, I mention that I have just purchased Atomised by Michel Houellebecq and he pretends not to know the same. I try to explain but he retreats into French. It is only later that I find out that one does not mention M. Houellebecq in polite society.

We are in a taxi. I am afraid for my life, then I give myself over to abandon as enjoy the ride.

To quote my Swiss friends, the Montmartre is turistik. I am beyond the moment of accepting everything as it is though I can imagine others being disappointed. We sit on the steps of the Sacré-Cœur Basilica.

We fall into the sleeper berths on the night train back to Zürich. I’m sore from walking and burned to a crisp. We are due to give a presentation at 9AM.

How I Almost Started Writing is a series of brief portraits focused on the times in my life where I found myself on the verge of focusing solely on the writing life.

10 thoughts on “How I Almost Started Writing: Paris”