Yay! Apple approved the build for NewsBee and 1.2 is now in the App Store! Below is a reprisal of my 1.2 announcement post plus a little extra.

I’ve been using version 1.2 for the last few months now, making tweaks and changes to the way the application handles extended characters (i.e. “international”) and parses RSS and HTML data. Oh, and I completely rewrote the event handling code to rely on GCD instead of performSelector. Yeah, that was a biggie. I really had no idea how big of a job it would be until I made the changes and then began the process of stripping out all the old code. Woof!

I’m glad I did it though. Under GCD, NewsBee is running very smoothly even with a large number of active sites. No more momentary delays when you pop open a menu or perform a manual refresh. Sure it was just a few milliseconds, but it seemed a little sloppy to me. Well, delays no more!

It’ll take Apple a little while to get back to me, but I want to thank all of the testers who helped me with this version. I especially want to thank those of you from around the world who sent me feeds to test and helped me deal with the thorny issues of character sets. NewsBee 1.2 is way better because of your help!

As it sometimes the case, a developer forgets something when updating their app. In this case, I forgot to update the “About” splash screen with the 1.2 label. Doh! No worries though, it’s still version 1.2. 🙂 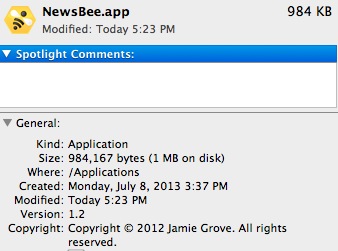