As most of you know, I volunteered to write an ode for the winner of Daniel Smith’s Can You Put the Wit in Twitter contest, and I was quite pleased when my pal RhodesTer, aka Dave, was announced as the winner!

The lady at The Coffee Bean laughed at my joke when I ordered a “Synonym Roll”, and asked her if there was another word to describe it.

Coming up with the right tone for RhodesTer’s ode was a bit of a challenge. The title was simple enough, but the voice? What voice? Then I thought of all the surreal tweets RhodesTer’s made about his dreams and old Bill Lee crept in and sort of took over. 🙂

to be read in the voice of William S. Burroughs 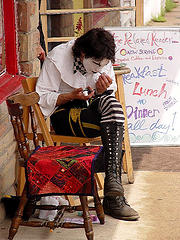 Image credit: Zen (Flickr)
This mime is not Jack Kerouac.

Had that dream again…
The one where a mime gets his own radio show
complete with a cast of thousands…
Along with the otters
and the accountants
in a room full of candles.
Johnny Depp played the butler,
while deep in the Palm Springs night,
a little dog barked
till RhodesTer comes knocking.
Some way for dogs to rule the earth.

Coffeesister says,
“Dave, never David,
went from being seen and not heard
to heard and not seen.”

Even Shadowsillybutt gets a cameo
because broadcasting cats
isn’t just for breakfast anymore.
It’s what everyone does
with a new webcam.
Is that why Tommy Smothers says you’re funny?
I wonder what Gwyneth Paltrow would say.

And then,
way
way
down
at the bottom of the page…
RhodesTer has the nerve to ask,
“Why are you looking WAY DOWN HERE?”

Well, I’ll tell you Dave,
I’m looking for the free cheese that goes on my damn fish sandwich
and you moved it.
Don’t tell me Angelina
made off with it in the shaving cream-filled Miata either,
because I saw you riding side saddle on that Nighthawk,
Mr. Breeze.
I want my cheese.
All of it.
I’ve had a few beers already,
so don’t make me put you on the company computer.

RhodesTer has 22 dedicated readers. Please be sure to stop on by and subscribe to his blog. He updates it once a month whether it needs it or not.

9 thoughts on “On the RhodesTer, An Ode to Dave”