There are times when the words come so fast and so pure that I can’t slow down for a second to even read what I’m typing. I just go faster and faster until the sentences and paragraphs become nothing but a blur.

[How do I know when to hit RETURN, anyway?]

As a new writer, you’d be right to ask, “That doesn’t happen all the time, does it?” Actually, it happens more than you think. Once you’ve started writing regularly, you’ll come up with little tricks, habits, or rituals (no animal sacrifice please). No matter how you do it, you’ll find that the more you write the easier it gets to slip into the mode of deep writing. That is, unless your inner critic starts sharpening their pencil. 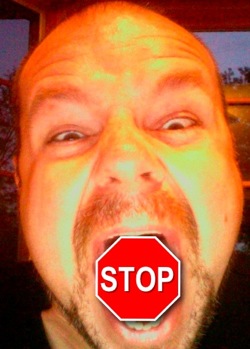 Let me introduce you to my little friend (aka The Jerk Who Keeps Me From Writing).

Your inner critic (aka The Jerk Who Keeps You From Writing) is always there waiting for a chance to question your word choices, the motivation of your characters, the tinny dialogue, the plot, or even the entire concept that drove you to sit down and try to write the book in the first place. The inner critic knows you better than you know yourself, and they know exactly which buttons to press to stop the creative machinery.

I met my inner critic when I was in the second grade. This was 1978. I was sitting in the back of the class, wearing a superman t-shirt (a nice 70s shirt with a gold and silver superman logo, cause that’s how we did it back then). The sun was rising and I was day-dreaming about being somewhere, anywhere but there in the classroom. Suddenly, there was a voice in my head:

“What do you think you’re doing? Stop dreaming and pay attention.”

I shook it off and went back to gazing out the window, but the voice was persistent:

“Who do you think you are? Everyone else is working. You should too.”

I looked around the classroom and sure enough everyone else was listening to the teacher (or appeared to be). I thought that maybe I ought to at least pretend that I was interested, but it was so beautiful outside. It was a day much like today in fact, sunny and just a little misty. The kind of morning that smelled wonderful and made you want to ride your bike block after block until you were so far from home that you thought perhaps you might live in the hollow of a tree rather than pedal all the way back.

The inner critic is wise to this sort of wandering mind. It knows to start slowly. It lets you run for awhile and then reels you back in a bit. It tires you by degrees so you don’t make a push and break the line.

That’s the last thing I remember, but the critic didn’t go away. In fact, it became stronger over the years. It was a long time before I realized that I was the one giving it the power.

In writing, I find that the critic likes to hide behind the period of a sentence. It’s waiting there, even now, even as I type this sentence. I wonder sometimes if that’s why my sentences grow so long, as if I’m so afraid the critic will stop me that I run on and on until there is nothing left to say and yet in desperation my creative heart grabs at another preposition and tosses it into the water so that I might float for awhile longer.

Yet, the period must come and then I must begin again.

If you’re going to write several thousand words a day, you need to figure out how to live with your critic. I’m not going to tell you to defeat it because I believe that’s impossible. It might go away for awhile but it’s going to come back some day when you least expect it.

In my case, I take a deep breath and push forward with the work at hand. If it isn’t flowing, I write about the fact that it isn’t flowing. I just type. Eventually, my hands find their way again and I slip back into the creative state. Occasionally, I get angry and just power through the voice, but I tend to shy away from that technique because it leads to burnout. I think it is much better to try and still the mind through a brief diversion than to search about for a hammer.

By the way, my inner critic was right about one thing – no one else is dreaming like I am. Only I dream the dreams that I have, just as you dream your dreams. As writers, it is our duty to turn those dreams into stories we can share.

Maybe my critic didn’t think I’d take the message and twist it around that way, but then again perhaps there was someone else in there who did.

I wrote about this experience because many of you in NaNoWriMo will be writing a novel for the first time, and you are going to come up against your inner critic. You should know that every writer struggles with this and there are no perfect answers.

When faced with your inner critic, you’ll have to work to find a way around, over, or even through. If nothing seems to work, try writing faster. That always helps me, or maybe it just makes me too busy to notice anymore. 🙂

Note: I just added the picture of my little friend. I originally wanted to post him, but for some reason I wimped out. Maybe my inner critic doesn’t like the light of day, or maybe, I have some taste after all. Regardless, in the spirit of true transparency, he’s up here now!

Doing NaNoWriMo? Buddy up with me!