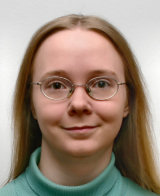 Maija Haavisto is a Finnish journalist and the author of Reviving the Broken Marionette: Treatments for CFS/ME and Fibromyalgia. She doesn’t have blog beyond Twitter (gasp!), but since early 1997 has maintained a bustling personal website. She also writes for the online magazine Suite101. Art, photography and cooking are close to her heart. Her NaNo novel explores the ideals of transhumanism and self-actualization in the framework of a fictional memoir. Is life about quality or quantity, and how many lives can you squeeze into one lifetime?

I started writing when I was five. I always knew it was what I ultimately wanted to do for a living, even though I found out fairly soon that being a novelist was unlikely to pay my bills. I figured out I was going to be a journalist and write those novels on the side. Meanwhile I wrote many short stories and hundreds of poems, winning a few writing contests here and there.

I wrote my first novel in 1998 and another one the next year. In early 2000 the first manuscript was reviewed in the weekly supplement of the biggest newspaper in Finland – not a bad start. But in August 2000 I got sick with an infectious neurological illness known as CFS/ME, though at the time it was just a “fever that didn’t go away” with some cardiac symptoms. At first it wasn’t so bad, even though my parents kicked me out at the ripe old age of 16. By a massive streak of luck I got myself a job as a freelance tech journalist and didn’t end up on the street.

I wrote two more manuscripts, in 2001 and 2002, but after that the cognitive dysfunction caused by my illness made it impossible to write any more novels. I could hardly even read novels any more. I switched to textbooks which were easier, but often I was only able to read magazines. Sometimes I could not even do that, and the only thing I could do to attempt to entertain myself was reading ad catalogues.

It was obviously extremely humiliating. I was having difficulty writing my articles, even though my boss never complained. Many of the pieces I write were software tutorials which meant I had to read plenty of help files. Sometimes I just couldn’t understand a single word.

The magazine I worked for went bust in 2006. In a way it was catastrophe, especially since people with CFS/ME have no rights in this country – I’ve never seen a penny of the sickness and disability benefits I’ve supposed to have been getting since May 2006 – but in a way it was also a relief.

My problem was no longer just “brainfog”, it had progressed to dementia – supposedly “mild” but it sure didn’t feel mild. All my other symptoms were massively deteriorating as well. I was only in my early 20s and it looked like I would be in a nursing home soon. I tried to accept the fact I might not be writing any more novels, ever, that my life was essentially over, but I couldn’t.

I had to accept my situation looked miserable, but I was not going to give up. After I no longer had work I started writing a medical textbook about CFS/ME treatments, though I wasn’t sure if I could ever get it finished. I knew hundreds of medications that could have helped me, but the doctors I was seeing at the infection clinic of the Helsinki University hospital could have cared less about giving me a chance.

In early 2007, however, I heard of a private doctor who was open to new treatments. I had the feeling that he would help me, so I decided to see him even though it cost me as much money as buying food for two months. He agreed to prescribe me several medications he had never prescribed before, thanks to the information about them found in my manuscript.

The medications worked. By April 2007 I was already quite a bit better. A few days after starting a medication for cognitive dysfunction I wrote a short story several pages long and felt I was reaching into what I had deemed “my previous life”. My medical textbook was finished and with it I could help many others, too. I decided to start translating the book into English, but I still had cognitive dysfunction and wasn’t sure whether I’d be able to write a novel in the future (as weird it may sound, it’s much easier to write a scientific textbook when you have brainfog than write creative fiction!).

In early 2008 I tried yet another medication on top of the ones I was already taking. It was like a miracle: suddenly my cognitive dysfunction was almost completely gone. All my once wonderful math skills were still lost in the void, but I didn’t really care. I could write much better, not only in terms of quantity, but quality too, and the world of reading novels was again fully open to me. I was also glad to finish the English version of my CFS/ME book, which ended up being a massive 346 pages.

It’s a wonderful feeling to get your brain back; you can’t really explain it to someone who hasn’t been there. It is like getting a new life. It didn’t take long until I started planning to participate in NaNoWriMo. I had been interested in participating since I first heard about it in 2002 or 2003, but it had been out of my reach. Now I felt could do it, and I already had a novel idea brewing in my mind.

It has been six years since I last wrote a novel. In a way it seems like I’ve forgotten how to write a novel, in a way I’m not sure if I ever knew how to do it. I was just 18 at the time, now I am 24. I can’t even remember how it felt to write a novel. Trying to do it again feels like a jump into the great unknown. I feel as if I’m a born again writer.

It frustrates me that I lost many years of good writing time with my brain in the darkness. I was once a great (and experienced) writer for my age, now I’m just a good writer. I have no more “competitive edge”, I’m just one more writer in the crowd. On the other hand, I’m just happy to get back to what I love the most – writing. I am far from healthy and still suffer dozens of bothersome symptoms, but if I sleep 10 hours I usually have a few hours that I can use as I please.

In the end, my biggest challenge may not even be my health but the fact I stubbornly insist on writing in Finnish (because I’m looking to get published). The entirely different structure of the language means I have up to 50% more work to do than the people writing in English and have to write an almost 50% longer novel than any of my previous manuscripts (which have been about 35k words, but would be long enough if they were in English).

I want to show myself I can do it.