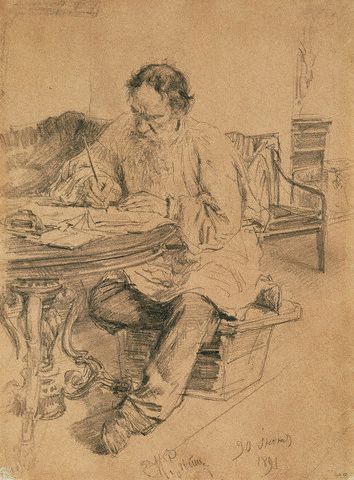 For the last month, Leo Tolstoy has been loyal and vigilant here on the site. I can’t say he’s been waiting for my return because obviously, he’s been busy writing. Just look at him!

I was supposed to be busy writing too, but I haven’t. In fact, I’ve not been writing anything at all except for some fifteen pages of handwritten memories about a weekend I spent in the Alps eight years ago. But, for those of you who can to visit, there was Leo working away in his peasant dress, at one with his creative self.

One reason I haven’t been writing is that I’m not entirely sure what I should be writing. I’ve spent quite a few years rambling about from one form to another, studying the specifics of different genres and styles.

I can’t honestly say that I ever thought I’d get back to writing. I’ve taken breaks before and talked about those breaks here on the site. Quite often, I’ve found myself unbelievably happy during my respites from writing. Yet this time, I found that I was feeling less than happy but not quite melancholy.

It was truly as if a deep numbness had settled on my mind and my soul. Almost a feeling of sleep, but not the restful sort. The sort of sleep that happens by magic in fairy tales where people fall against their will into a slumber lasting decades or centuries. What a fitful set of dreams must lie beneath the false calm of an enchanted slumber…

But sometimes there is such beauty there, beauty that my own feeble skills cannot hope to render appropriately. This of course is the torture every writer must endure, but there is also the responsibility to the creation to the voices that cry out to be heard. This is the service the writer performs for the universe.

I read an article this weekend by Boris Kachka in New York Magazine about the End of Publishing. It’s a sad read in so many ways, but I suppose the worst of it is that it seems to insist that the death of publishing is a foregone conclusion. There is no way out really. None at all. Yet, how could that be? How could something like this just disappear when I have so many things left to say? And if I have so many things left to say, what about the real writers out there? Are they done telling stories?

My reading of this article came on the heel of David Foster Wallace’s suicide. For those of you who are unfamiliar with Mr. Wallace, he is the author of Infinite Jest is considered to be the brightest star of his literary generation. So, to hear that publishing is dead (with the implication that it expired by its on hand) and that an author of Mr. Wallace’s stature is also dead and gone – I should have experienced an even deeper sense that my writing was nothing but a fruitless struggle. However, I had the opposite reaction…

I got angry. Very angry.

I was angry about the fact that this man had killed himself – and not for the normal reasons people abhor a suicide. I was angry that he turned off the light on all those stories that only his unique voice could share. And I was also angry at the publishing world for giving up on itself. And I was angry at all the readers who didn’t bother to pick up books anymore because they hadn’t the time.

But mostly, I was angry at myself.

To those of you in the literary world who are thinking of giving it up (either literally or figuratively), consider this an open invitation and a call to arms. If you’re struggling, know there are others who are struggling also. If you’re lonely, reach out to those of us who are here with you.

For those of you who write or struggle to write, this is really all you need to know. This is your duty and your calling and you should honor the gift you have by never quitting.

[Disclaimer: This lit rant comes unedited straight from my heart. Forgive the typos for my heart is a fat-fingered thing. And if you need a literary shoulder to cry on my email address is at the top of the page. Now get back to writing!!! :)]