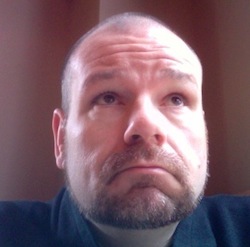 blub blub blub… The only thing I really have to whine about is being fat, and that’s my own damn fault too.

As we work through this craziness of writing, we all struggle with the same problems. It might happen at different times or in a different order. We might be so unfortunate as to have them hit all at once or when we least need or expect it. The point is that it happens.

When it happens, there’s not much you can do. You can’t wish it away. There’s just one cure: you have to write.

I realize this is all very abstract and repetitive, but any good religion has it’s fair share of ambiguity and ritual. Writing’s not so different. In fact, to continue the analogy, we might collectively name these woes a crisis of faith.

A crisis of faith manifests itself in many ways. In my case, it’s usually some part of me trying to convince myself that I don’t like writing, that writing makes me sad, or it isn’t really all that valuable.

Of course, what I really and truly hate, is feeling like a mopey writer. Really, there’s nothing worse than a writer who whines…

Bullshit. Everyone has time to write. People like to say that J.K. Rowling had time to write Harry Potter because she was on the dole. That’s probably true to some degree, but she was also a single mother. Last time I checked, that particular occupation was crazy-ass busy. She didn’t find time to write. She made time to write. So can you.

2. I don’t know what to write and/or I don’t have anything to say

Of course you do. You wouldn’t be complaining if you had nothing to say. You’re probably afraid of or embarrassed by what you have to say. You might be afraid of putting yourself forward. If fear isn’t holding you back, then it’s probably the realization that writing is real work. In either case, don’t sit around and whine about it. Suck it up and get back to the keyboard.

Welcome to the club. Every book ever written is essentially a copy of some other book. Even if you think you’re in the middle of developing something truly original, there are plenty of books just like the one you’re writing. This shouldn’t be depressing. It should inspire you and comfort you. If you get lost along the road, there’s not just one map to help you, there are dozens.

Now, if you’re thinking of originality in terms of style, you need to know how to write a story everyone can read before you screw up and write something no one will want to read. That sounds like I’m denigrating über-literary works and I am. I’m doing that because I spent a long time trying to write one, trying to develop a unique style. I came to realize that what I was doing was working on a technique designed to hide the fact that I didn’t know how to write a story.

If you’re going down that path, get out now before you trap yourself and waste a few years trying to be the next James Joyce, who by the way could write a damn fine story without all the obfuscation that came along with his obsession with time (which was a madness of the age).

4. Everyone’s disappointed that I want to write

Whether it’s disapproving parents, spouses, lovers, children, teachers, co-workers, whatever, there’s always someone out there waiting to crap on your writing and on you for daring to write. My only suggestion here is to tell this person to mind their own damn business.

If it’s your partner, then I’d ask why the hell you’re with them or why they’re with you? Do you both enjoy making each other miserable? If you wrote your life as a story, what would you as a character do? Suffer for hundreds and hundreds of pages? My what a boring story that would be! No, the character version of you would get the hell out of there and do something interesting!

The point here is that you have to stop worrying about what other people think. Only other writers will understand what you do and why you do it. Don’t bother trying to explain it to other people because they’ll just be confused or jealous.

Who does? Writers get better with every book they write, but they have to start somewhere. Pick up the first published novel of any author and you’re in for a special treat of awfulness. MFA programs have dulled this a bit in recent years, but that’s only because they’re keeping writers out of the market until they have their skills up to snuff.

Anyway, you don’t need to be perfect. You just need to be good enough. Chances are you’re already good enough but you’re just wound so tight that everything you write comes out strained through a hyper-rigid sphincter. Loosen up. Relax. Allow yourself to write without worrying about commas. Yeah, you’ll have to put all that crap in again before you send it out, but at least you’ll have written it in the first place.

You’re right. You’ll never get published. In all the world, there is no one out there who wants a story from a writer who thinks they’re never going to be published.

Strike #6 through right now or you won’t get published. Ever.

Have some other whines to add to the list? That’s what the comments are for! Do it quick and get back to writing!