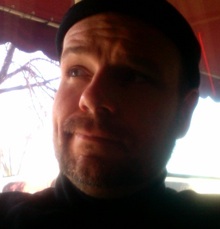 Now that I’m supposed to be a serious and devoted writer, I’m going to focus on writing only the most serious and dedicated of posts on the austere topic of the writing life.

Yeah, I’m not buying it either.

To those of you who worried that my change in status from employed dreamer with novelistic ambitions to gentleman of leisure and still-unpublished writer extraordinaire would somehow alter the content of this site, this post should put you at ease.

It’s a nice rambling post for a Sunday morning… Enjoy!

Yesterday, I was just signing off to spend some time with the Ann and Jeff VanderMeer’s excellent SF/F pirate anthology Fast Ships, Black Sails.

When I got a tweet from a fellow who used to work for me a long time ago. And, well, you know me…

One tweet leads to another and suddenly Dustin Wax of Writer’s Technology Companion gets in on the action:

And now I’m left with a rather interesting visual: Dustin’s singular, well-defined ab.

We can all laugh at the joke because writing, well… writing really isn’t a contact sport, now is it?

No, there’s nothing I like more than sitting at the cafe, pecking away at the keyboard with a nice demitasse of espresso and a cinnamon roll decorating my little table. Yep.

So, the writing life doesn’t lend itself to keeping fit… or does it?

Below is a picture of Cory Doctorow and Jeff VanderMeer (swiped from Cory’s Flickr page). While these guys may not be in the next Calvin Klein skivvies poster shot on Times Square, they’re in pretty good shape for a pair of wordslingers. 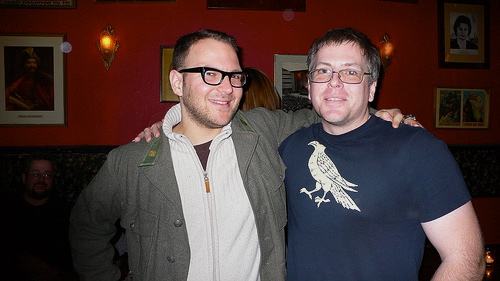 [NB: Jeff, if you’re stopping in you can thank me for retouching the original. 😉 ]

If you follow Jeff VanderMeer, you probably know that he does a bit of weightlifting. If you’re a long time reader of this blog, you know that I used to be a pretty avid runner.

I’m pointing this out, because part of focusing my life on writing is getting another shot at being healthy in every sense. When I was really running, I used to do 6 miles a day in about 30 minutes. For the non-runners, that’s pretty fast. Of course, I’m a long way from there today, but I’m committed to working my way back.

My wife and I just joined a new gym. She has a pretty amazing story of her own, which I’ll introduce in the not too distant future when we launch her blog. For the moment though, I’ll just pop in a promo video from the gym:

After just a few weeks (of less than regular attendance, but attendance nonetheless), I’m already feeling the benefits. I’m running at less than a third of my former pace, but I am running. I have more energy. I’m crackling with ideas and plans.

I’m always up for some reason not to be writing. Most of those reasons are a matter of simple avoidance or fear. However, working on my writer’s ab (singular) is one that I’m not willing to lump in with the rest. While the sedentary work of writing may not provide natural opportunities for exercise, working on the Writer’s Ab(s), is as vital as any other writing exercise.

YOUR TURN: How are you working your Writer’s Ab(s)? What advice do you have for others?