On a cold morning, it’s difficult to get excited about running. The bed is warm, but the alarm goes off anyway. I might lie there for fifteen minutes trying to convince myself to just go back to sleep while simultaneously picturing all the things I ate the day before as evidence to the fact that I really do need to go.

The winter was mild, but I haven’t kept up with myself. The reasons are strange, complicated, and thoroughly mixed up with one another. Perhaps it is best to leave these bitter roots beneath the soil. 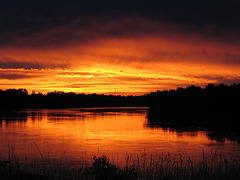 Though I’m not feeling up to the challenge, I take The Long Run.

The long run begins at the top of the ridge, winds around to the bottom of the park, and then spirals down to the river. Here, the way turns mostly flat, and I run along the service road until I come to a dirt trail that follows the contours of the bank. An old post stands at the end of the line, a talisman drawing the runner forward. It becomes ritual to touch the post before turning back.

A thin layer of ice lays on the river. In the darkness, I hear the water groan beneath the slick surface. Besides my chuffing this is the only sound.

The dirt trail begins at a low point, susceptible to surges. Bits of garbage and driftwood spread out like echoes of the storms that tossed them onto the shore. The mess is frozen but spongy. I tramp across with an uneasy gait.

Further on, the trail rises. Gravel crunches under my feet. I notice a view once crowded by thick brush is clear. Only the saplings are left, and their silhouettes look like cracks against the backdrop of the ice.

A quarter of the way through the run, I feel like a steam engine out of its shed for the first time in years. My wheels are tight, but they are loosening. I pass below the stone shelter house where on autumn evenings you can sometimes see a fire in the hearth. It is dark.

There is a older man on the trail ahead. He’s coming back from the far end. He has a dog with him. When he sees me, he calls the dog and puts a leash on it. As I get closer, he begins to jog. We exchange our good mornings and pass on. I wonder if I will see him again, or how far he is going. I don’t recall seeing any cars parked along the way.

Just before the end, which is actually the middle, there is a gentle slope upwards, a dip, and then a short but sharp climb. It is at this point I always feel I catch my second wind. I have no idea if it is psychological or just a matter of getting warmed up, but I feel stronger and I make for the post and slap it hard as I turn back.

The sky is lighter. Dawn does not creep across the sky with rosy fingers. It’s more like a dimmer switch raised slowly. Black becomes blue and then orange. The trees no longer look like shadows. There seems to be something left in the rest of the run that I could not see beneath the covers half an hour before.

When running north, one can’t see too far ahead because the river bends just slightly. On the return, the way is clear and the water always in view. I can see the blue arches of the bridge I passed under from a good distance. I can see where the river meets the reservoir dam.

I’ve not run this far in a long time. My muscles and my lungs seem fit, but my knee is not. A dull throb begins at the same point where I passed the old man a few minutes before. By the time I pass the stone shelter house, the throb becomes an ache. I keep pushing. My body wants more. I keep pushing until the pain becomes intense enough to cause white specks to float in front of my eyes.

I sigh. I walk until I reach the place where the trail turns soft. The river groans beneath the ice and I feel wet from my efforts. I pass the carcass of a goose half-eaten by coyotes or raccoons or other things that scurry about in the dark.

Off and on, I try to run. It’s more like a hobble but it keeps me warm. Ahead is the climb uphill, back to the ridge. I run on the balls of my feet. The angle of the road takes some of the pressure off my knee.

I’m heading east now, and surely I must look like I’m in pain. I suppose that I am, but as crest the hill the sun breaks loose on the horizon. I feel nothing but the warmth of a body in motion.