Yesterday, I watched the launch of STS-135. Maybe you did too.

What Ideas Are We Giving To The Next Generation? 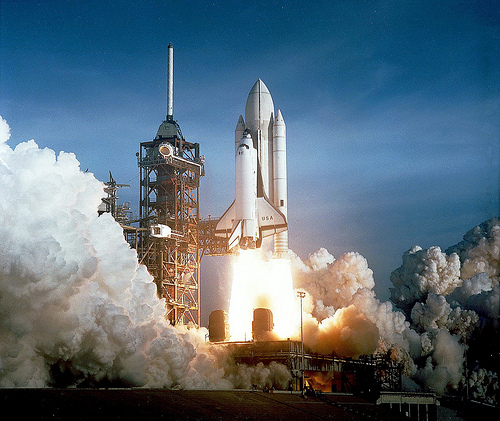 What I remember most about STS-1, besides the white fuel tank, is being excited about space and the beginning of a grand voyage of human exploration and adventure. It was an idea that grew from the Apollo program, which itself had inspired an earlier generation. It was a gift of the best sort. The gift of an idea that we could do something even bigger than the last generation. That we could be more as human beings…

The answer, I think, lies in the clear-headed response of a 12 year-old boy: In space, no one can hear you advertise.

So, What Exactly Have We Done?

I think it’s a fair question.

We’ve solved none of the pressing problems of the past. War is rampant and eternal. The energy crisis is worse than ever. We’ve destroyed much of our sense of community through aggressive polarization, and reduced our sense of humanity to the petty needs of instant gratification. We may have access to all of the knowledge in the world in the palm of our hands, but we no longer have the will to bend the laws of nature to our imaginations.

In short, we seem to have chosen a path of apathy instead of one of adventure. We’ve chosen to become static instead of dynamic. We are squabbling amid the wreckage of a civilization that has not yet died, creating evermore selfish systems in commerce, in politics, and in life.

But I think that all is not so bleak as it appears. If we put our minds to it, we can be more than this one moment in time. We can reclaim our dreams and reinvigorate the spirit of adventure which has defined the best in human achievement throughout history.

The Human Spirit Is Not So Easily Defeated

My younger son and I talked about the shuttle launch too. He was excited about the roar of rockets and the smoke and the flames. He talked like a boy who is seven about the majesty of such an incredible achievement, which is to say there was lots of “wow” and “cool” and whooshing whoops.

His excitement was infectious and I told him about the first shuttle launch. I told him how we watched at school and what it meant to us. We talked about space then and what lies beyond, and then we set about killing zombies because that’s what we do on Friday nights.

So while we can be sad about the closing of this chapter in the space program, we must be ready to write the next. Those who follow us are counting on us to live our dreams. We must supply them with nothing but the very best examples of our imaginations brought to reality through the willpower of the human spirit.

We must fight through the malaise of the moment. We must create. Because it’s not enough to simply shake our heads and walk away… We must repay the deficit dreams we leave for those who follow.

8 thoughts on “The Dreams We Leave For Those Who Follow”