A flower shop occupies the first floor of this building. In turn, a cat occupies the flower shop. This feline, a sleek, black puss named Boo, is the most friendly sort of cat. You can’t help but call him Boo Kitty, which seems a little feminine but he tolerates it. 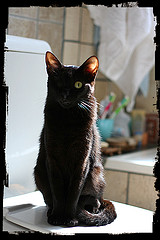 Quite often, I am the first person to see Boo Kitty in the morning. He stretches and slowly makes his way over to the window, rubbing his head against the flower-filled wicker baskets in the window. I say hello to Boo Kitty. In return, he looks up at me with wild, yellow cat eyes as if I am insane, but then resigns himself to merely blinking his eyes languorously.

As I understand it, cats say hello by blinking. I’ve also heard this behavior described as “sending kisses.” It seems rude not to return such affections and so I to blink slowly at Boo Kitty, taking care not to close my eyes completely just as he does.

This reminds me of something I heard regarding the Japanese custom of bowing: that one should not entirely break eye contact when bowing. I have no idea if this is true, but it does lead to thought about a recent observation I made at the airport.

A few weeks ago, I went to the airport to pick up an arriving family member. While waiting outside the gate area, a young woman arrived with a sign of welcome addressed to delegation from the University of Tokyo. She took up a position near the secured exit and held the sign tight against her chest.

As we waited for our respective parties, I watched the woman shift her weight from one leg to the other. Because she was quite tall I couldn’t help but notice how small the poster-board looked in her hands.

When the students from Tokyo arrived, there were muddled hellos accompanied by much nodding and smiling. When the formal introductions began, the bowing progressed from round one to round two, then seemed destined for a third round. The Japanese looked uncertain and then uncomfortable. Two of the Japanese began ignoring their host entirely, looking around the atrium with a sort of distracted sense of despair.

I do not claim to understand the intricacies of Japanese greetings, but even I could tell something was wrong.

Thinking about Boo Kitty, I wonder what he must think as I try to greet him with my feeble impressions of cat sign language. He does not appear to be uncomfortable or resent the fact that I am blinking at him.

But when should I stop blinking?

In practice, I usually stop when he turns away and begins studying the silk flowers. His detached intensity reduces me to a state of non-being. When he does this, I often tap the glass to get his attention, so that I might continue my obsessive winking despite is clear indifference.

Now that I am observing this bit of prose at a distance, I see an interesting pattern evolve which is not unlike the “double-slit” experiment in quantum physics.

The double-slit works this way (at least in my feeble mind): 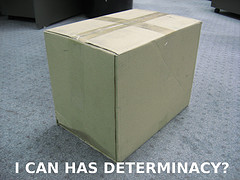 Begin with two sheets of metal parallel to one another and separated by a certain distance. Cut a slit in one sheet and then shine a flashlight through the slit. On the the second sheet, you will see a pattern shaped like the slit. The definition of that shape is controlled by the distance between the two sheets. If you move them further apart, the shape becomes more diffuse, closer together more distinct.

Now, add a second slit to the first sheet. When you shine the flashlight through both slits, you might assume that you will end up with two shapes on the second sheet that bear a resemblance to the first experiment. However, something else happens instead. You get a banding affect across the whole second sheet.

How does this happen?

In the case of a single slit, light flows somewhat freely from the slit to the second sheet. There is no interference save for the distance. When a second slit is added, the diffusion I mentioned earlier is complicated by two streams of light touching one another. This interference causes collisions which in turn radiate outward as a kind of lattice. When the lattice reaches a plane (i.e. the second sheet of metal), it imprints the banded effect on the two-dimensional surface.

This is really too technical though. I think that a better way to describe it is to look at the checkout lanes at the grocery store…

If you have a single checkout, customers stream out one end and generally head to the exit. If you observe the line over the course of an hour or so, you will see certain deviations. For example, some customers return their carts while others might step to the side to investigate a product that is only visible after one has completed a purchase. As a side note, the latter customer is oddly confused for it is not apparent how one actually goes about buying the thing if it is not in the established path to purchase. The vast majority though head for the door.

Now, add a second (or third checkout line) and things change. Instead of a fairly smooth path to the door, carts pile up, people get in the way of each other, and if there is more than one exit customers may change direction completely. So instead of an even distribution of people exiting, a minor chaos evolves in the tiny collisions that occur after the successful transaction.

Literature evolves in a similar fashion.

In this post, I begin with a man (me) standing outside a shop window. There is a cat inside the shop. The man, who would like to pet the cat, is prevented from doing so by the presence of the glass. Unable to interact with the animal in his preferred manner (i.e. scratch the kitty’s head) he tries to establish a connection with the cat through the non-verbal cues he’s learned from observing the habits of cats. The man and the cat are the first slit.

To this scene, I add a reminiscence of witnessing the Japanese greeting at the airport. As the shape of the piece evolves, these two threads produce different offshoots.

For example, the cat in the first part is black and sleek. Though it may be stereotypical to say so many Japanese students have a look that may be describes as black and sleek to western eyes. Their hair is black and their facial features are smooth. They are usually thin and dressed in black. And in fact, all of these things are true about the students I saw (though they are not universally true). To a person, they were dressed in black and though in unfamiliar surroundings they did not move like shy people do. They sort of floated through the terminal, gracefully taking in their surroundings.

Well, why did I do that?

And this is a good question because the first version of this work contained all of those details. You see, as I was writing the piece these two streams of imagery collided and produced a lattice of essential and non-essential information. All of it was transferred to the page, and what should have appeared as two distinct story lines became a series of bands.

My essential story is about the mistakes we make when trying to connect with others and the untouchable magic of the Other which compels us to make those mistakes even when we know that we are making them. That sentence may be a bit confusing. Let it sink in for a moment.

So, as the bands of the composition process evolved, I found myself staring at a bit of a mess. I needed to clean it up. Fortunately, writing is not like the rest of the universe. Though a pattern evolved, I can make revisions by erasing the non-essential bands. I scrubbed out the details about the woman, and those about myself. I removed the parts where I touched the glass to “pet” Boo Kitty though I kept the rapping on the glass at the end because it was similar to the woman’s incessant bowing.

What if we took this approach to other things in life? What if we allowed the diffusion of so many threads to rest upon the surface of the moment and then went back and scrubbed out the non-essential. Does life become more interesting? Is Boo Kitty more interesting with the rather cruel observations about the woman, or do we fade those cruel observations into the background so that the main message is made clear by example?

I think these questions are not easy to answer, but they’ve done a fine job of keeping me from writing this morning.