Even though I’ve written two novels, I’m amazed when people write and ask me about writing. After all, my is site called How Not to Write and both of the aforementioned novels were absolutely dreadful. Still, I’m flattered and I think it’s fun to connect with other writers. I also enjoy sharing what I’ve learned pecking around these last 20 years or so (even if it’s not worth all that much). 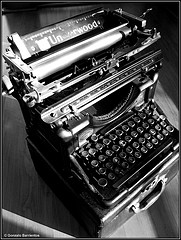 But last week something odd happened… A famous, or rather infamous, blogging entity wrote and asked my advice about writing.

Anyway, as I would with anyone, I decided to answer the query as best as I could. After sending my reply, I found out that the entity is not infamous as a joke. It’s a professional vocation.

I’ve been sitting on this for awhile, letting the whole thing settle. I’m not going to name names, but I liked my email so much I thought I’d share it with everyone (after making it anonymous and doing a little formatting).

It’s a little sassy, because the entity is sassy. Hopefully someone will actually get some use out of this.

How to Write a Book… Or Not

No imposition at all. I’m happy to help…

Writing a book isn’t all that different from blogging. Each day you piece a little bit together. Sometimes it works and sometimes it doesn’t, but either way wanting to do it doesn’t get the posts up. Wanting to write a book doesn’t get it written.

So the first thing is in order to write a book you need to write the book. I like Charlie Stross’ thought on this:

“You eat or starve on the basis of your ability to put your bum in a
chair and write. BIC or die, that’s the first rule. Lifestyle issues
come a distant second.”

Of course, this doesn’t tell you how to start, so it has the distinct advantage of being both profound and shitty advice.

Amazing how often the words “profound” and “shitty” go together, isn’t it?

What I’ve learned by observing other writers is that no one has a clue how to do this thing called writing a book. Everyone is winging it. There are formulas of course and if you’re going for formula fiction you just pull one off the shelf and start filling in the gaps. But you’re not doing formula fiction, right?

The second rule of writing a book is to have a plan. I just knocked the formula thing, but in truth you need a plan. Some writers like to plan out every little bush and shrub. To me, that’s boring as hell. I like the idea of a rough sketch, just big blocks of, “This happens, then this happens, and oh, this happens next.”

The point is to get the big ideas down in a way that you can shuffle them about until they look right. After that you go back and start tidying up. Some writers use index cards to do it. That’s how Nabokov did it, and things worked out pretty good for him.

The third rule of writing a book is to keep it to yourself. I cannot tell you how many times I’ve killed perfectly good stories and novels by showing them off too soon. Even worse is talking about the damned things. Once you’ve let the cat out of the bag, you’d rather kill it than try to get it back in. Part of the thrill of writing a book (see fun back at #1) is knowing you have something that no one else has seen yet. This is what will keep you going.

Finally, the fourth rule of writing a book is to sit down and write. Even if all you do is write nonsense to begin with, just keep going. Write faster if you can. Will Self is an advocate of this method. I’ve found that if I stop looking at the screen and just focus on the keys that my fingers eventually find the groove and I write some amazing stuff or at least I stop being so self-conscious, which may be all you really need).

Ok, I could probably write another half dozen rules here, but this is a good start. Don’t let doubt get in the way. (rule 5?).

I hope this has been of some help. Write back if you need more. I find that swift kicks and kind words are good for writing books if doled out in equal measure.

Why Bother? Because This Isn’t About Me.

As is par for the course, the entity sent me a rather patronizing note. No biggie, since I have no real idea of what I’m doing. I’m very up front about that. Again, why else would I have a site called How Not To Write?

So why bother with the cranks? Because this site isn’t all about me. It’s about helping others by sharing what I know.

I received an email from an interesting fellow not long ago. He promised a sort of writing elixir (I’m not making this up), not the sort you drink with the mouth but with the mind. I told him to bring it on and he did. Some people I know thought he was crazy, a loon. And they were right…

Yet, as it turns out, I’ve enjoyed his work and look forward to the next installment. I learned the hard way that crazy is sometimes where the greatest truths lie though you might need to dig through the weeds a bit.

We’re all working to do the best we can. I’m no different from anyone else in this regard. I write because I enjoy writing. I share what I’ve learned during the process because that’s all that I have if nothing else.