I picked up a new rejection in my inbox this week. 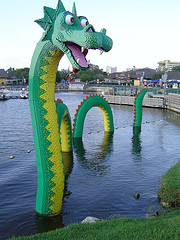 Note: This dragon does not appear in my story…
[Image credit: teejayhanton Flickr]

The story is quirky, so I know it will be difficult to place. Should someone force me to classify it, I might call it Terry Pratchett meets David Lynch…

In any case, the editor, who is known for being tough, blunt, and fair, did not disappoint. The rejection notice outlined the basic faults of the story and clearly explained why it wouldn’t work with the publication. I really couldn’t ask for more.

I read a lot of posts by struggling writers who get themselves worked up into a terrible fit about their rejections. Having been there myself, I realize it’s hard not to take these things personally. So, with a fresh example in hand, I thought I’d take a moment to share a few thoughts on rejection.

6 Things Not to Do When Your Story Is Rejected

A friendly bit of advice from an editor is not an invitation to send a thank you. It is certainly not an opportunity to argue the case for your story.

Editors are busy. Do not waste their time.

If you decide to argue with an editor, you’re not only asking to be blacklisted from their publication but also from other publications. Editors talk. You do not want to be the subject of conversations like this.

I’ve heard stories about writers who have written back and badgered editors into taking their stories. I suppose that this approach might work in some few instances, but I just fail to see the point in it. If the editor wants you to write back, they’ll tell you. Plain and simple.

2. DO NOT: Throw Away Your Story

I sent the story to this particular publication because I thought that they would like it. I was wrong. However, this doesn’t mean the story is bad or ought to be burned in the street before a cheering mob.

As I said above, the editor rejected my story not me. This is one editor, working for one publication. I will likely submit to this publication again in the future because I like it and would like to see my work with other writers I respect. For the moment though, I’ll be moving on.

3. DO NOT: Cancel Your Subscription

Now, why on earth did you subscribe to this publication in the first place?

Do you believe that editors check the membership rolls before accepting stories?

I have no idea if they do, but it seems like that would be a fairly ridiculous thing to do… Read the next issue. Get inspired. Try again.

4. DO NOT: Blast The Editor and/or The Publication

This is an extension of #1.

It’s natural to feel disappointed when you are rejected, especially when the subject line of the email says REJECTION in all caps. 🙂

20 years ago it wasn’t very easy to get the word out that you’d been rejected by publication X. Today, the Internet makes it possible to make a fool of yourself immediately in front of rather large groups of people.

Don’t take it personally. Have a little pity party for yourself. Cry on the shoulders of your friends for a minute or two and then dust yourself off and get some more stamps.

5. DO NOT: Pester Your Friends and Readers for Good Words About Other Stories

Crying on the shoulders of friends is one thing, but badgering them for opinions after a rejection is taking advantage of their friendship. It’s also unfair to the work you’ve placed in their hands for careful consideration.

I can’t claim to be a saint on this one.

In fact, on same day I received the rejection notice, I rushed off a message to someone who is reading a new story. It wasn’t fair and I apologized (and here I apologize again). This is part of the reason I wrote this article.

6. DO NOT: Tell Yourself That You’ll Never Be Published

You will be published. It may not be in the biggest publication. You may not get paid. However, I guarantee that someone, somewhere will publish your work if you keep sending it out.

Yes, even you crazy people too.

There are loonies in publishing just waiting for the next manifesto. Not many, but they’re out there.

Please don’t hurt anyone though, quite unnecessary.

The only way you will fail to be published is by failing to send out submissions. I know because when I stopped sending out stories I stopped showing up in print. Shocking, I know, but editors are not coming to visit me at the cafe to see when I might have some new story for them to hurry to their readers.

Even though my story was rejected this week, I turned around and sold a non-fiction article. Just got the email yesterday!

This is the first time I have ever been paid for my writing. Those stories I mentioned earlier paid in contributor copies. So, I’m pretty excited about this modest little start. I suspect that this would have happened much, much sooner if I’d kept going way back in the day, but I’m not dwelling on it.

I’m off to the post office to by more stamps.

As an aside, if you’re interested in self-doubting Barbarians, wise-cracking wizards, and pornography-loving dragons (without depictions of actual pornography), email me and I’ll send you the story.

The story contains fewer hyphens than suggested by the previous sentence… if that’s any enticement. Like I said, it’s a bit quirky. They can’t all be Alice Munro meets William Gibson.