Back in 2009, I wanted a simple word count tracking app on my shiny new iPhone. There wasn’t one, so I wrote it myself. From what I recall, creating WriteChain was a really fun process. I look at the app now and I still smile when I see the interface and think about how much things have changed since those “early days” of iPhone development.

So, tonight, I was checking in on the little guy and I wondered just how many people had tried it out. I haven’t looked at these numbers in a long time and I was surprised to see that about 5,000 people had tried it. Then, I realized I was only looking at a single year’s downloads… This year, which isn’t even half over.

Adding it up, WriteChain is just shy of 28,000 downloads now. I see a lot of people download the app around Nanowrimo and that makes me happy. I hope it helps out Wrimos and other writers alike.

Anyway, nothing else special to note here. I just felt like saying thanks, so thank you… 🙂

WriteChain is FREE. Nothing fancy. No hidden editors or quotes or any of that fiddle faddle. Just a super simple tool that any writer can use to set a daily goal and hold themselves accountable.

At this stage, J.K. Rowling can afford to do pretty much anything with her books. She could even give them away for free. Not that she is, but she could.

No, what’s starting up is a grand experiment to see if an author can claim a direct relationship with readers on a mass scale, removing traditional distributors (bookstores and Amazon, yes they are different things) from the middle.

I’ll say up front that I don’t have a lot of faith in this particular approach. If anyone could pull this off, it would be Rowling. She has enough raw content to lock up the channel and certainly enough mass. The problem is that Pottermore, Inc. has gone after this in a really short-sighted way that speaks to ego and naivety.

Babes in the Woods

Despite having an all-start cast working on Pottermore, it really does look as if they’ve been rather naive.

At a high level, the entire Pottermore process is too complicated. Just take a look at the giant FAQ on the Pottermore site. And keep in mind that this gripe about the process is coming from someone who is extremely technical.

Next is the depth of the partnership with Sony. Sony has clearly paid a pretty penny to be a prime main sponsor. A Google search for Pottermore yields a paid ad from Sony. The Pottermore site pushes the Sony eReaders ahead of all others. But here’s the thing, Sony has basically failed at each turn in the digital content wars.

The final issue is really the strength of Amazon and Apple. To buy on either of these platforms, you need to purchase from their respective stores. This means that both Amazon and Apple are going to get their cut (Apple eventually as they’re not signed on yet), but ultimately consumers will reject the Pottermore process because it is simply inconvenient. It’s much easier to open up the Kindle store on your Kindle and say “Accio, Chamber of Secrets.”

The Echo Chamber of Egos

Let me say first that I love Harry Potter. I read all the books, even when they turned bad. I rejoiced when they turned good again, and I raged when the last book turned into such a mess. Still, I never stopped loving the Potterverse and the characters Rowling created.

However, my biggest gripe about the Pottermore experiment is that it is incredibly ego-centric. For example, instead of focusing on how awesome things are going to be for readers and fans, the entire project seems to preoccupied with talking about “revolutionizing digital publishing”, the exclusivity of the shop, and the technical accomplishments of the team behind the store.

Let’s break it down by site:

Pottermore.com is the main content site for the project. It is “currently in beta” meaning that there is no actual content there for fans. In addition, instead of opening with a picture of harry Potter we have a video from the author and a rendered scene that is really more about the author. If you’re part of the beta, you can log in (one assumes from the blog content) share your own fan art and participate in discussions about Harry Potter.

shop.Pottermore.com is the main store for the project. I’ve already discussed the problems with the purchase process, but let’s look at the site itself. The front page of the site looks to be more of a business proposal rather than a unique shopping experience.

For example, why not way out on the edge and design something that feels like Diagon Alley (the wizarding shopping area featured so often in the books)? Create something immersive and rich that features more than just pictures of eBooks. Why not sell actual Potter merchandise, including high-end replicas and Pottermore exclusives? But to stay focused on the books, what I don’t see here is a real launching gem which is exclusive content. What’s on offer is the same, wonderful books of the series, but what about The Tales of Beedle the Bard?

What’s really ironic here is that Amazon has a great example of how to treat this sort of content: www.amazon.com/beedlebard. They wrote a thank you letter to the author and posted great pictures of the extra special volume that was auctioned off. They made it special. They made it about the story.

It’s probably not clear from the comments above, but I do believe it’s possible for authors to create deep and meaningful relationships with their readers. I think about authors like Neil Gaiman, John Scalzi, and of course Cory Doctorow.

But I also think about John Green.

Haven’t heard of John Green? Then you’re probably over the age of 25. The only reason I know about John Green is because my oldest son is an omnivore of fiction and forced me to read The Fault is in Our Stars, which was an amazing book.

That said, Green is perhaps the best example of how to build powerful author-reader relationships online. As half of the Vlogbrothers video blogging duo, Green regularly dishes funny monologues to his faithful audience on YouTube, but aside from the self-effacing humor there’s one common thread I found running through all of the online work: excitement about the work with no sense of ego.

Whenever John Green discusses his work, he gets excited about it like a fan might. There’s no pretension, just pure and honest joy at discovering the work and a graciousness that it’s well-received. Green gives and then gives some more, and when there’s nothing left to give he brings his brother in to help him find a bit more to give… Such as when he decided to sign over 150,000 copies of The Fault is in Our Stars.

Love of the story. Love of the readers. No ego. The writer lives to serve.

I think this is the most important thing the folks at Pottermore need to consider. Are they serving the story? Are they really helping the author to serve the readers? Or is it just a bit of machinery to advance their careers in publishing and fire a volley over the scary behemoths of Amazon and Apple?

Frankly, readers don’t care about that. They care about awesome stories set in awesome worlds. They care about characters and plot. Anything that distracts from this and creates a barrier between the reader and the story is just a massive distraction and a waste of time.

Do you ever dream of that perfect game night? When you and four of your closest writer friends sit down to play a game of Scrabble or Boggle or maybe Huggermugger?

Alright, I might be showing my age (and eccentricity) with Huggermugger, but I love word games! 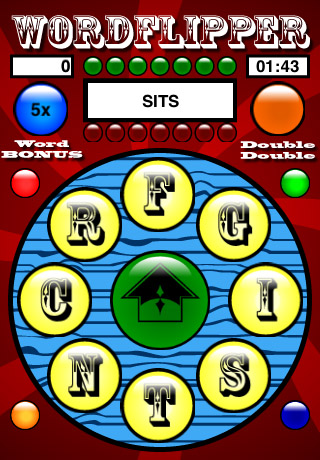 If you follow me on Twitter, you know that I’ve launched a new iPhone app. It’s called WordFlipper and it’s sort of “Boggle meets Dance Dance Revolution with a Carnival Twist” though some people just skip the tongue-twister and call it fun. 🙂

During the launch, I’m offering WordFlipper for free so if you have an iPhone or iPod Touch now’s the time to nab it.

Getting back to word games, I’m going to open this post up to you: What are your favorite word games and why? I’ll ask the question on Twitter too and post the results back here.

NB: In case you’re wondering whether I’ve given up writing in exchange for making iPhone stuff the answer is no. Didn’t you read yesterday’s Morning Walks?

Here’s a screenshot of WriteChain ready to go! 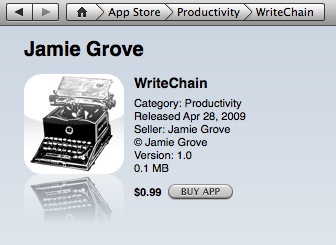 If you visit the link above, you’ll see there’s a nifty link for WriteChain support and information. That link goes to this page on How Not to Write: http://www.hownottowrite.com/writechain/.

Pop over now and take a look at all the screenshots and features of this fun and useful little tool!

A.B. England recently concluded a three-part series on writing methods called, “Searching for a Method to Madness.” The essays were thought provoking and inspiring. Here are links to all three parts: 1, 2,3. 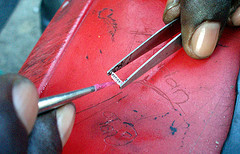 Reading her series, I found myself examining my own technique and I realized I’d actually fallen into something of a method that involves the use of index cards. At the moment, I am using virtual index cards in the writing program Scrivener but I also use the old fashioned 3×5 paper sort too. I also use other little scraps of paper where I can.

While may sound like a novel-by-gerbil method of writing I’m certainly not the first. For example, the novelist in Kurt Vonnegut’s Hocus Pocus claimed to have written an entire book on bits of found paper. Vladimir Nabokov also used index cards to write his novels. I remember reading someplace that he would scribble cards while his wife drove on long automobile trips. I’m not sure if I could do that. I suppose not having two screaming kids in the back seat would be help. 🙂

In any case, here are a few lessons I’ve learned about index cards:

1. Be Clear – Nothing is worse than finding a card in your stack that says “remember that thing” or “add dialogue from today’s conversation”. Even though you were in a hurry and swore you’d remember the details, I guarantee that you will not and you will bang your head on the table when you find cards like this in the stack.

2. Be Concise – Putting complete sentences on an index card may feel like a path to clarity, but in the confined space of the card you end up taking card after card and invariably one will get lost and become “remember this thing.”

3. Think Non-Linear – The benefit of using index cards is that you can shuffle and reorder them with ease. However, if you have constructed your thoughts in such a way that one MUST lead to the next, you’re missing out on the interesting possibilities that occur when you suddenly shake up the stream of your narrative.

I have a few more thoughts about index cards that I’ll share in future posts, but I’d love to hear about your experience.